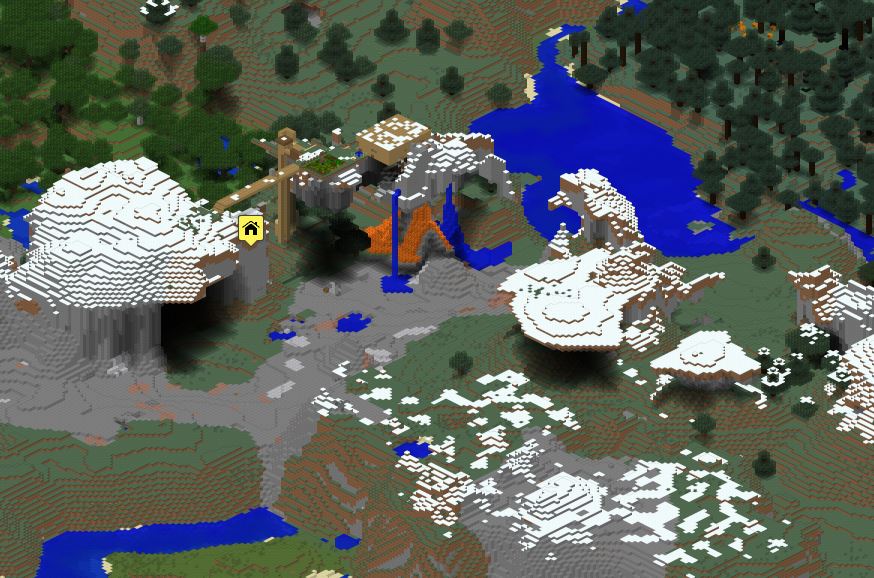 Not me, mind you. I've been casually playing Minecraft since probably around 2010. I'm talking about my 5-year-old daughter. She's finally to the age where she can play the game reasonably well (compared to just running around hitting things like my 3-year-old does.)

We can now set up a multiplayer survival world and actually survive pretty well. There are occasional deaths, but what fun would it be without those. For awhile, we played on “Peaceful” mode as she was still a bit reluctant to have to deal with the Creepers and Zombies during the night, but now we play on “Easy” and she's handling them pretty well.

On our first multiplayer map, we ended up finding a nice mountainside to dig a house into. We spread out a bit from there and built a small living area with animals and some basic crops. The survival mode turned into a slightly more creative mode (using server commands) which allowed us to build some cool things like an automated farm and a short minecart track with a hidden door.

This new map I hope to keep 99% survival mode (only using server commands in dire situations.) I find that playing in the game in pure survival mode teaches her about everything the game has to offer instead of her getting everything she needs at all times. She now knows how to create many items and build very cool things in the game.

Our new map's spawn was in an amazing location that looked like it was right in the middle of a blown out mountain (as seen above.) There are tall mountain chunks all around the edges, high floating islands in the air with both lava and water streaming down from them. We decided to build our mountain-top house on top of the highest island in the middle, well not really an island, more like a long, peninsula sticking way out over a massive drop. After securing the area, we'd be more than safe from creatures. Our only real danger up there is falling off, which we have both done on multiple occasions. Fortunately, the spawn point is only a few steps away so retrieving our lost gear is simple.

To make it easy to get up and down from our home, we built a ladder straight up from the ground to the island. I also made a long tunnel from the top to the ground that has a floor of water. This way, instead of climbing down the ladder every time, you can just drop straight into the water since you will survive the fall.

This map is still pretty fresh, so we're just getting started. We still haven't found much iron, yet. Though, we did already find a village which is something we still never found on our last map, so we were able to get carrots and potatoes pretty quickly.

I'll try to keep you guys updated (rather than not posting for over a year like we sometimes do.)