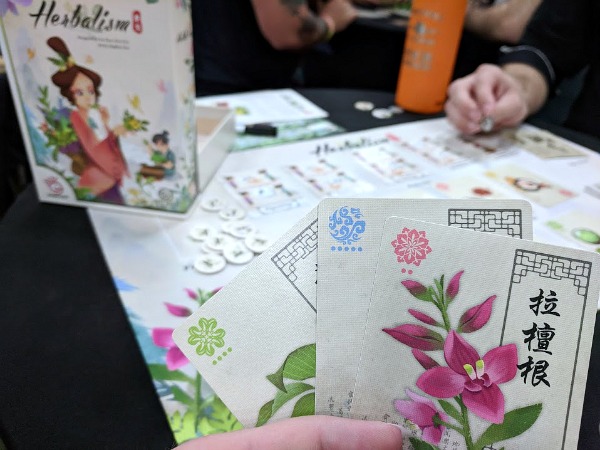 We are back from Origins Game Fair 2018 in Columbus, Ohio, which we attended as press. It was a bit of a whirlwind of a trip. Origins was from Wednesday to Sunday and we drove pretty much all day on Thursday. It's about a 7 to 8 hour drive from the Milwaukee, Wisconsin area (plus we lost an hour due to the time zone change). Friday and Saturday we spent at Origins and Sunday we spent driving home. We are tired but it's a good tired. We had a lot of fun and we will be sharing quite a bit of stuff about it over the next few weeks.

We walked into Origins not knowing what to expect, but we were very happy with how it was set up. Most everything was easy to find. Everything was clean. There were easy options for food, which is helpful when you have kids with you. Everyone we met was super nice to us and the kids and they are still talking about how fun it was.

We saw tons of new board games, too many for us to demo or look at. Though, we did come home with a nice, new selection of games to play. We'll go over those for you. You can also watch the video above to get the same info and see some of the games, too.

We received several of these board games to review. This post contains affiliate links. We may earn a small commission if you make a purchase.

One of the kids favorite things was the Origins Arena put on by Forged Foam. In there they were able to spar with each other and also trained members with foam weapons and shields. They had a lot of fun with that and would have stayed all day if we let them. It's an affordable activity that is worth it.

The kids enjoyed browsing booths and demoing board games with us. Two of their favorite board games were Echidna Shuffle and Pyramid of Pengqueen. We were only able to bring home one of those since the other was completely sold out and we ended up getting the last copy of the other one.

“Fun isn't something one considers when balancing the universe. But this does put a smile on my face.”

When walking by the USAopoly booth, their set up of Thanos Rising: Avengers Infinity War caught our eye. It's very well designed and the big Thanos figurine definitely towers over your game. It's a cooperative game similar to games like Pandemic where all players work together against a common enemy. We received a copy to review and finally got to play it earlier this week. It was really fun even though Thanos destroyed us. We'll get him back.

One of the first games we got to sit down and play was Star Realms by White Wizard Games. It's a space-themed deck-building game that is easy to pick up and learn, but hard to master.

We ended up bringing home a review copy of their other deck-builder, Hero Realms, which is more fantasy based. It's one we have consistently grabbed to play at home the last few weeks. If you're a video gamer and need a comparison, I found it very similar to the free-to-play digital card game, Fable Fortune.

We also demoed Pyramid of Pengqueen by Brain Games. This is clever game play with magnetic pieces on a vertical board. One person plays the mummy and the others play the penguins. The mummy cannot see where the penguins are. They had to catch the penguins using only clues given by certain spots they land on. Unfortunately, they were sold out, so we were not able to procure a copy.

We were able to sit down and demo Echidna Shuffle by Wattsalpoag Games with the kids and they loved it. It's a cute game with some pretty good strategy if you really wanted to get into it, but enough of a small learning curve that the little ones can play it. We ended up picking up the last copy they had, so it was obviously a popular item.

We finally bought our own copy of Carcassonne, along with the dice game version. This is obviously a classic board game and we had to get our own version.

Expanding Our Fief By Just A Hare

We stopped by the Iello Games booth to see what they had to offer and to tell them how much we love their other games, like Fairy Tile. While we were there, we couldn't stop looking at their Bunny Kingdom game, so we ended up buying that, too. We've played it a few times now and it's extremely fun and has some deep strategy. How is it not fun to grab territory and bunny masters using tiny bunny meeples? Our 7-year-old played along last time and I think she could play on her own fairly well even though the game recommends 14+.

While we were browsing one of the shopping areas in Origins, a nice older couple stopped us and said they had something for us. They ended up getting a copy of a game called Sticky Chameleons by Iello Games. They asked if our kids wanted it since they probably were not going to play it. The kids obviously said yes. We played it a few times. It's an interesting concept. Each player gets a long, sticky, stretchy “tongue” and you need to grab the bug cards on the table based on the die roll. It's a lot of fun for the kids (and adults.)

We're excited to play Escape: The Curse of the Temple by Queen Games. Our son was drawn to the stack of Escape games at the Queen Games booth. It looks to be slightly different from most games we play as it is a real-time game. It uses a soundtrack to be your timer as you try to escape. We received the Big Box version to review with all of the expansions. We haven't had a chance to open and play it, yet, but we're all looking forward to it.

And, obviously, we had to complete our collection of accessories for one of our favorite games, Roll Player and its Monsters & Minions expansion by Thunderworks Games. At Nexus Game Fair in Milwaukee in May, we picked up a bunch of accessories for it and were only missing the dice tower. Now we have that. We also got to meet the designer of the game, Keith Matejka. It turns out that he is also from Wisconsin, so we were able to have a bonding moment over that. Another game we received for review that we're looking forward to playing with our friends is Herbalism by Deep Water Games. It's sort of a deduction style game. Using interaction with other players, you're trying to determine what those two cards are. The design of the game is very pretty. The way the cards are designed, with not just colors but symbols and without words, makes it easy for those with color-blindness, young children, or non-native speakers. They told us that this game is also nice to play after a long day as it can be calming and chill. We also received Hive Mind by Calliope Games and looking forward to playing it as a family. From the description, “During the game, the players must be harmonious in answering intriguing questions based on their experience and opinions. The more answers they have in common with other players, the more points they get! Represented by bee pawns called Beeples, players move through the hive; those who score the fewest points each round must move closer to the hive exit. As soon as one or more bees exit the hive, the game ends. All the remaining bees win and survive the winter!”

Overall, it was a great trip. There are several new games we learned about and viewed while at Origins Game Fair too. We're already discussing plans to attend again next year.

Stay tuned here and everywhere else we post content for more in-depth coverage of these games. We're hoping to live stream some playthroughs on Twitch and Facebook.

Which one are you most interested in learning more about? This website uses cookies to improve your experience while you navigate through the website. Out of these, the cookies that are categorized as necessary are stored on your browser as they are essential for the working of basic functionalities of the website. We also use third-party cookies that help us analyze and understand how you use this website. These cookies will be stored in your browser only with your consent. You also have the option to opt-out of these cookies. But opting out of some of these cookies may affect your browsing experience.
Necessary Always Enabled
Necessary cookies are absolutely essential for the website to function properly. This category only includes cookies that ensures basic functionalities and security features of the website. These cookies do not store any personal information.
Non-necessary
Any cookies that may not be particularly necessary for the website to function and is used specifically to collect user personal data via analytics, ads, other embedded contents are termed as non-necessary cookies. It is mandatory to procure user consent prior to running these cookies on your website.
SAVE & ACCEPT
8 shares