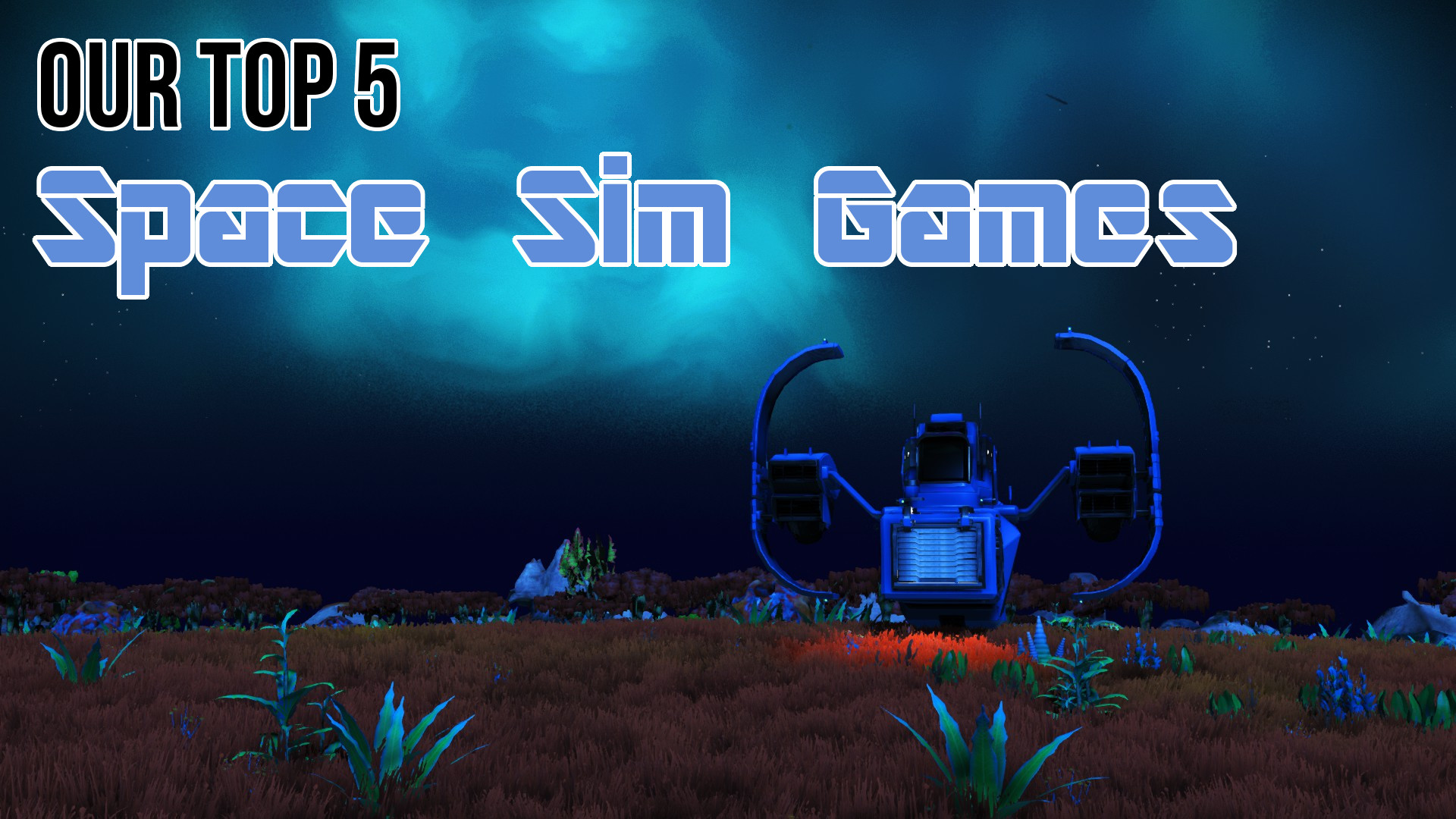 I have been getting back into the space sim genre of games again recently. There are a few game genres that I get really into every so often and space sim is one of them. Space sim games can cover a broad range of games. Though, all of them don't require you to be in the actual cockpit of a ship. Here are some of our favorite space sim games.

This is the one I'm currently into the most right now. I originally started playing this back in 2015 (as based on my last played date in Steam.) For whatever reason, I stopped for awhile, but decided to get back into it. I also picked up the highly acclaimed “Horizons” expansion. According to the Elite: Dangerous wiki, this game is “a massively multiplayer space epic and fourth installment in the legendary Elite series, the longest running space simulation series in history.” They have created, as best they could, a complete 1:1 scale of the Milky Way galaxy based on real scientific principles.

In this game you get to pilot one of many spaceships in the game in real-time, picking your destination, supercruising through systems, dog fighting other pilots, or docking your ship into a space station orbiting around a massive ice planet. The great thing about this game is that you decide what you want to do, be it trading, pirating, bounty-hunting, mining, salvaging, or even exploring. There is an actually an in-game group called the “Fuel Rats.” They help bring fuel to stranded players who may have pushed the limits a bit too much while exploring the vast unexplored parts of the galaxy. Also, with the Horizons expansion, we can also now land on planets.

I've personally played more of the trader role for most of my play time. It's relaxing and a good way to learn the basics. I am planning to get more into exploration a bit as I love finding new things. Plus, if you do find a never-before-seen system, you get your name of it forever as the discoverer. The other cool thing about the game is the background simulation, which is described as a being “dynamic, complex and reflecting the evolution of the known galaxy with ever changing power and system influence of factions in response to [all] player behavior.” If you'd just like to chill and play, there is also a “solo” mode that allows you to fly in the same simulated galaxy as everyone else but only with AI players. There is so much to do in this game, I have yet to scratch the surface.

Stellaris is one of those games where you don't need to be in the cockpit to enjoy space. It is a sci-fi grand strategy game set 200 years into the future. It is published by Paradox Interactive, so if you've ever played Crusader Kings 2 or Europa Universalis 4, it's like those…but in space.

You choose a race of aliens (or humans or robots) and start with a single system in a large galaxy. From there you do the normal 4X things you do in these games: eXplore, eXpand, eXploit, and eXterminate. The game is deep and has a multitude of ways to play. If you're not the eXterminating type, you can expand and try to keep the peace with your neighbors, so of whom will probably not like you for whatever reason. A bit like the Civiliation series mixed with the Crusader Kings series mixed with space dust.

EVE Online is a vast, community-driven space MMO where players can play for free, choosing their own path. The new Arms Race release gives players even more for free now, including access to all ships up to Battleship class, across any faction. Get even more involved in immense PvP battles, as well as PvE combat, exploration, mining, industry and a thriving player economy in an ever-expanding sandbox. — EVE Online website

Usually considered the granddaddy of space simulation games. I last really got into EVE Online back in like 2014. At the time it was still a pay-per-month MMO. Since then, it has gone partially free-to-play and they've done a good job of it. I recently jumped back into it to see what has changed (hint: a lot.) You can now experience a lot of the gameplay without paying a penny. The parts of the game that require you to upgrade to a pay tier (or if you're rich enough in-game, you can use that) are obvious and not at all made to be in your way while trying things out. My main character, who I started in 2007, is a bit held back unless I upgrade. He has many high-level skills, but my lower characters can do a lot in game and still get more skills.

There is too much to do in EVE to explain in a paragraph. Similar in scope to Elite: Dangerous, the playstyle is slightly different. You're more often in third-person in EVE and you're controlling the ship itself more than as a pilot, if that makes sense. It does within EVE's backstory. The cool thing about EVE and it's economy is that almost everything used in game from ships to ammo are all created and sold by players. If you need something, make it or buy it from someone else. If you want to be EVE's ammo king, buy it all up and sell it for massive profits. It's economy is so realistic, they famously hired a well-known economist to handle it.

Check out the selection of some of our favorite space sim items below to help you really get into your game. 4 and 5 continued below.

4. FTL (aka Faster Than Light)

FTL is a top-down roguelike game where you and your crew try to make it through eight sectors, each with planetary systems and events, while dealing with enemies and other procedurally generated goodness. As with most roguelikes, you'll never get the same playthrough twice. Besides defending yourself, you will need to recruit new crew and outfit and upgrade your ship. Combat takes place in pausable real time. If the ship is destroyed or all of its crew lost, the game ends, forcing the player to restart with a new ship.

It's a fun game that can be played quickly in short-bursts without requiring a lot of involvement (or possibly spreadsheets if you play EVE Online.)

Most people have probably heard of this game by now, either due to it's pre-release hype or its immediate post-release complaining. I personally have enjoyed the game from day one and still enjoy it now. I imagine most people who play it will agree that it's come a long way since day one and it is very enjoyable now.

The big selling point to NMS was always the procedurally generated deterministic open universe, which includes over 18 quintillion planets. Each planet has its own unique flora and fauna and sometimes inhabitants. No player will see the same thing as another player. Everything that you discover first, you can name and forever leave your mark on (good or bad.)

Since release, the game has added many great things including: home planets, base building, photo mode (one of my favorites), on-planet exocraft vehicles, mining and farming, survival mode, and galaxy-wide portals. I am always amazed and blown-away by some of the things I find in the game and just how insanely large and vast it is without feeling empty. It can be a calm, chill experience if you need some down time. If you based your view on this game by the initial reviews, I would go back and read some updated ones or try it yourself, you will enjoy it.

The universe is ever-expanding

As with all genres of games, this is not a complete list (by far) of the best space games out there. For example, do games that sort of involve space get included, like RimWorld? We may come back with another list of games related to space in the near future.