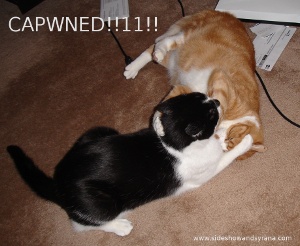 Good, it's nice and quiet in here.

I don't get a lot of time to play, since those two noobs are always at their computers.  And weekends? Forget it! The only time I can safely log on is in the middle of the night.  Bella is supposed to be my look out, but she fails at it.  Freckles can be counted on sometimes.

Oh man, I get him in so much trouble… jumping on the counter… I just tell him there's some food and up he goes! Lawl.

Wait, what was tha-

Loud truck went by, I had to hide… er, um, investigate.

Anywho, I wanted to share some druid love.  Cuz, these two, they play lame-o broken classes that no one likes.  Little do they know, I haz an uber druid.

And I rawk the PvP.

And I'm no carebear either.  I rolled on a PvP server cuz I'm hardcore like that.  I'm finally breakin' out into the contested zones and it's been a blast pwn'in' noobs everywhere I go.

Like the other night, I was doing some quests and I could just smell noobcake near me.  I shifted into me form and stealthed up to them.

He's all crying and begging.  I was like “Wut up? U got Capwn'd lol”

I'm pretty good at pwn'in' IRL too.  Check this shizz out:

Too bad I can't earn honor points off that big ol' cat.  He's like, what, 4 levels higher and 6 pounds heavier than me?  He's fine if he's pwn'in' me, but once I take Tonz of Fun down, he's all QQing to Syrana and Sideshow.

He doesn't play too much since he likes to sleep.  I can't blame him, but I get my best sleep when Syrana and Sideshow are at work.  When Freckles does play, I make him be my meatshield.  I mean, just look at him.  He has tank written all over him, amirite?

*Leaps out of chair and dashes under the bed.  A few minutes go by before he slinks back to the computer*

I heard something again.

Aww dammit! Some dbag ganked me while I was AFK.  WTF?! So uncool.

*Licks his paw and rubs behind his ear, then licks at his back a couple times*

Looks like I'm going to be putting these quests on hold while I camp this jerk.

And no, I can't tell you noobs what my toons name is or which server.  You'd be jealous of my pure awesomeness.

*Looks at the window, noticing the sun starting to rise*

Crap, looks like I better go nap on the couch.  But one thing is certain, if I don't get me some Fancy Feast this week, I'm deleting Syrana's toons.

After I take her gold.

Hmm, I should make Sideshow a chick.  That'd be funny.