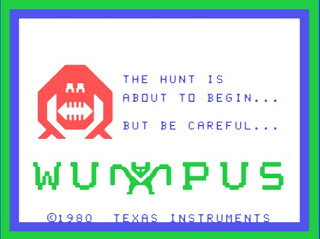 I've been gaming for a long time now when I look back on it. The first games I was able to play were on either our Texas Instruments TI-99/4A or our Commodore 64. From those games until now, I've played all kinds of stuff, but for some reason these 10 memories stick out the most. I order them chronologically, as best I can.

I remember playing this one on our TI-99/4A using the cartridge drive that was built-in. In the game, you had to move around a map while guessing which direction to travel. There were multiple things that could happen including falling into a pit, finding the Wumpus, or a successful move. The final goal, I think, was to kill the Wumpus. Another choice you had was to shoot an arrow in one direction, though if  you missed, I think the Wumpus would hear it and move closer to you. It also makes a good band name. [Wikipedia]

This one was by Spinnaker Software. I know that this game was on our Commodore 64. I vaguely remember it, but now looking at the screenshots I found, a lot of it comes back to me. I definitely remember the little characters and making them do things. I know I played it with my cousin, Ryan. We both had, and still have, a demented sense of humor so we had a lot of fun with it. Watch it in-motion on YouTube. Isn't the Internet awesome?

These were two of the few handheld games I remember playing as a kids. The Mattel one was the first one and it was basically just one small line dodging other small lines, but dadgummit, we loved it! The Bo Jackson game, by Tiger, was a little more “advanced” as it used the little LCD screen sprites and it also allowed you to flip it over to play either Football or Baseball. I think I was pretty good at the Mattel one, if I remember correctly. Watch the Bo Jackson game on YouTube.

I used to love playing this game on the NES. I don't remember beating the game, but I do remember finding different power-ups, like the the ability to turn into a ball and better weapons. The future versions of the game never grabbed me like this original one did. [Wikipedia]

Even though I obviously remember playing Super Mario Bros. and Duck Hunt on our NES back in the 80s, this game sticks out for some reason. I'm pretty sure we had rented it from the video store (a what?) that was down the street. I don't remember it being a particularly good game, but we obvious had fun playing it. [IGN Article]

I remember when we got this game for Christmas one year. All of the presents were opened and this was the last one they gave us, for reasons obvious to me now. I sort of remember my older brother and I freaking out we were so excited. Don't you miss getting excited like that over a video game? [Wikipedia]

By the time we got this game for our SNES, I was now playing mostly with my younger brother. I recall hours and hours racing each other and battling in the head-to-head arenas. The original Rainbow Road will always hold a special place in my heart. [Wikipedia]

This game required me to use a mouse with my SNES. Crazy. I spent hours trying to draw things and making simple music in the music editor. The one thing it did lack was a long-term saving option, so I never did anything too extraordinary in it. [Wikipedia]

This was the first thing we got with what we thought was the next big thing from Nintendo, the Nintendo 64. The game itself was very impressive compared to previous Mario titles, but since we got in so early with the N64, the choice of games was really weak. The weak choice is what pushed me to sell the N64 and buy a Playstation. That was basically the end of my Nintendo-only relationship with video games. [Wikipedia]

When I first saw information on the game, I was somewhat confused, as everyone probably is. This was back before the game really exploded, so there wasn't much info on it. You had to load the game up, jump in, and just figure it out. No Minecraft Wiki. I fell in love with it. If 8-year-old me had access to this game, I would've never left my house. As an adult, I love the no-goal mode it has, but sometimes feel a bit overwhelmed by that fact. As a kid, that would be the best part. I'm really looking forward to showing my kids the game and letting their imaginations go crazy. [Website]

Which memories of your gaming history do you remember best?