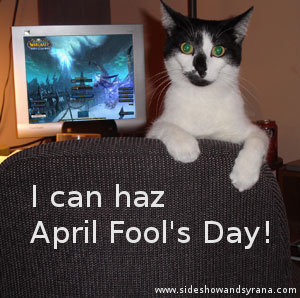 (The Doctor has prescribed a dosage of Capwn, so we're fillin' the ‘script today.)

Syrana changed her password… tryin' to block my midnight runs.  I've been fienin' for a fix somethin' awful.  She's not as easy to distract as Mary.  I mean check this out… those cats are my heroes.  And their sweet DK Puppykiller?

Although, it takes two of them to play one toon.  I do it all myself.  Because I'm awesome.

*tail flicks about, stops to scratch behind his ear*

You know, Syrana's Google Reader is filled with a gazillion blogs… blahblahblah.  Mine has only 4 in it.

One for each paw of power.  I've got those WoW playin' kitties in there fo' sho'.  Then I have that little ballsy Gnomer.  He looks mighty tasty, what can I say?  I also gotta get my fix of WTFspaghetti.  Although, I'm thinkin'… WTFchickenliversandgravy.

*licks chops, eyes glaze over for a moment*

I might have to start that… especially if Syrana keeps shooin' me away from her computer.

And last, there's Jong.  He's funny as hell and pwns everyone left and right.  Too bad he's not going to write anymore.  I totally woulda asked him to 2's with me.  We woulda tore it up.

My toon is gone.  GONE! Syrana claims she has no idea what happened.  I think she was just jealous.  I mean, some forum troll the other day said something about how her gear looked like the corn in his poop.  I guess it's a pretty big insult that her gear looks… undigested? whole?

She refuses to have my druid restored.  So, I have to reroll.

It's alright, it won't take me long… with a flurry of teeth and claws I'll be back on top.  And just in time for badge changes, too! Get ready so I can Conquest yer face!

*licks fervently at his paw*

You know, this dumb cat calendar that Syrana has said something about cats groom themselves an average of 5 hours a day.

That's insane.  There's no way I do that.  That would totally cut into my WoW time…

So, where should I reroll?