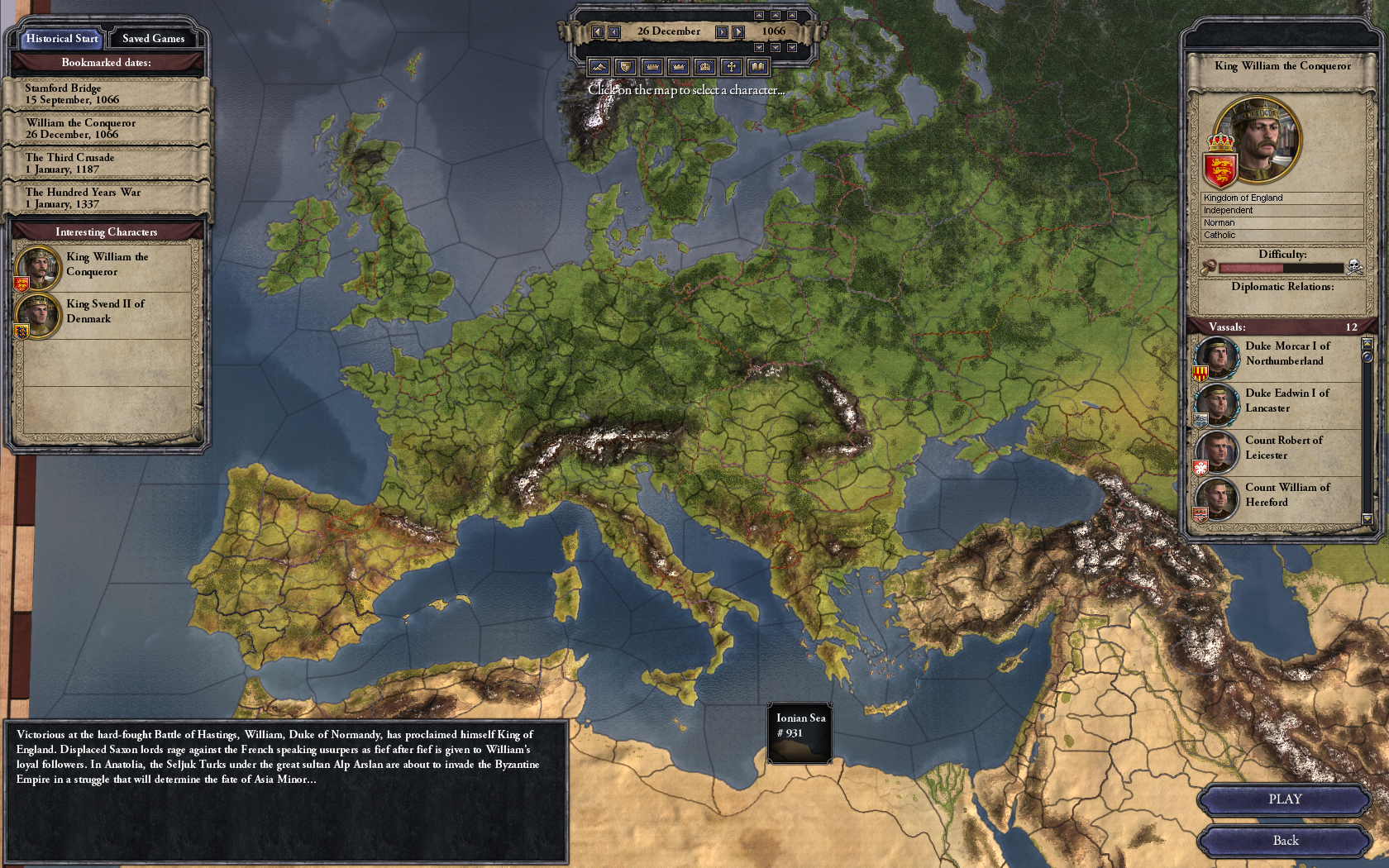 It’s Good to Be the King

Another Steam sale has come and gone and, as you know from past posts, I'm a sucker for those. This one was no exception, though I definitely didn't spend as much as I did during the last Holiday one. I did pick up a bunch of good titles that were on my wishlist for under $10, so that's good. A sleeper title that I picked up, Crusader Kings II, has just sucked up all of my time.

I actually heard about this game a bit while watching a developer video on a Double Fine Kickstarter for their Massive Chalice game. That game includes some dynasty and multi-generational strategy elements and they mentioned CKII. I honestly expected CKII to be one of those spreadsheet-type games with lots of data and stats, but I was pleasantly surprised.

The Dark Ages might be drawing to a close, but Europe is still in turmoil. Petty lords vie against beleaguered kings who struggle to assert control over their fragmented realms. The Pope calls for a Crusade to protect the Christians in the Holy Land even as he refuses to relinquish control over the investiture of bishops – and their riches. Now is the time for greatness. Expand your demesne and secure the future of your dynasty. Fill your coffers, appoint vassals, root out traitors and heretics, introduce laws and interact with hundreds of nobles, each with their own agenda.

A good lord will always need friends to support him. But beware, as loyal vassals can quickly turn to bitter rivals, and some might not be as reliable as they seem… Stand ready, and increase your prestige until the world whispers your name in awe. Do you have what it takes to become a Crusader King?

You can choose any one of hundreds of noblemen during a few important time periods to play. Start with a king and rule your minions, or start with a count and work your way up to emperor. There is really no goal to the game, it's basically a sandbox. Each time your character dies, you begin to play as their heir. Do what you want, the only important thing is to continue your dynasty by having heirs because once you run out of bloodline heirs, your game is over (or it hits 1453.)

All of the reviews of the game talk about how difficult it is to learn, and that's mostly true. The tutorials are somewhat helpful, but I learn better watching it in action. I personally found it really helpful to watch a collection of those Let's Play video series on YouTube, specifically the one by J2JonJeremy. That first video is a good intro to the game and the UI.

The UI they built to view the map is gorgeous. Zooming in and out changes  the detail of the kingdoms and counties without complicating things. There is a ton of data to deal with, but they organized it so well that everything is easy to find and make use of. No spreadsheet strategy gaming here.

Once you get into the game, it's fascinating. I started as King Bolesław II of Poland and it went pretty smooth during his reign. He lived to be pretty old, even by today's standards, dying at 82. That's when everything fell apart. My new heir was the King's first born son, Franciszek, though he did not inherit everything because the succession laws in Poland were “Gavelkind.” That law gives the first heir the major titles and then equally spreads the rest to the other heirs (male in this case.) So, Franciszek's half-brother, Josef, decided to declare war on me for his claim to the Kingdom of Poland. He won, due to having many allies.

It didn't last long as his brother, Roman, went to war with him for the kingdom also, imprisoning him in the process and taking over. More people started wars. In the end, or as it stands in my game right now, Roman is dead, Josef is a Duke, their sister Elisabeth is now Queen of Poland, and I'm down to one county, but still alive and scheming including secretly murdering two Counts. Though Franciszek is no longer my character, his son the heir is now my character. Sadly, one of his main traits is “imbecile” so he's a really bad ruler. He has no bloodline heir since he's only 15, so my goal is to get him a son before he dies or gets assassinated.

How does that not sound fun? And that was just one game using one of the hundreds of rulers you can pick from.

Though, if medieval Europe doesn't float your boat, they have an amazing Game of Thrones full-game mod for it that I hear is quite good. Maybe you can make Ned Stark the king, or at least execute Joffrey.

There is a demo available on their website and on Steam, so you can try it out there. I don't know how deep the demo goes, but at least you'll get a feel for it.