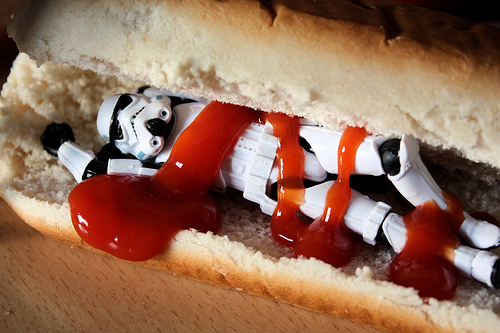 I've been meaning to write this post for quite awhile now.  It's content has changed a bit and the title has changed a lot since it started rattling around in my head.

So, pull up a chair.  I'm not sure exactly how this one will flow or how long it will take us to where I wanna go.

At the beginning of this hiatus, I was dedicating my free time to playing through Heavy Rain.  I had also mentioned (especially on Twitter) that work was crazy hectic.  Well, I finished Heavy Rain that week.  Took me roughly 10 hours of playing time.  I'm still planning to post up my thoughts ‘n such, so I won't say much right here.  (And maybe by the time my procrastinating butt gets to it, I'll actually have done another play through… since that still hasn't happened yet.)

Oh, right, I was also playing a lot of Harvest Moon: Animal Parade and getting over my Facebook “games” addiction.  (It was all in the name of research – I SWEAR!)

Well, work was very crazy – a lot of changes were happening at work (read: layoffs).  Needless to say, my work load and stress level sky rocketed.  When I'd get home, I didn't even want to look at my computer.  My gaming plummeted right along with my posting.

During that time, I also had to make a tough decision, which was to step down from my leadership role.  It took a lot of thought, discussion, and crying (I am a girl, m'kay?) to reach my final decision.  But, lemme tell ya, a huge weight lifted off my shoulders.  (I was in one of those odd “middle management” type positions… where I did the same work as “line staff” but was supposed to be part of the management team since I was the “lead staff.”  Now I can just concentrate on my actual job and not the office politics and assorted extra duties that I was expected to fit in on top of the same workload everyone had.)

Work is still a bit unstable, but things are going much better than they were a few months ago.

Sideshow made a good point when I was trying to figure out what to do – that the situation (and my thought process to reach a conclusion) paralleled when I decided to step down from being an officer in our guild last year.  That wasn't easy either, but let me get back to enjoying the game.

It's interesting to me that sometimes we examine our lives and make conscious decisions about prioritization… and other times… the priorities order themselves.  At least, that's how I've been feeling.  I didn't sit down and think “ya know, I need to focus more on work blah blah blah.”  I just sorta automatically rearranged some things.  And some of that was just about needing to take care of myself.

Another difficult decision I had to make was leaving Polygamerous.  I had a ton of fun during my brief two month stint.  Unfortunately, as much as I wanted to continue being a part of it, I knew I couldn't dedicate enough of my time and self to it any longer.

So where does that bring us now?  Well, I've been doing a lot of reading.  That's always a good thing.  I've also spent too much time veggin' in front of the TV (instant Netflix on XBOX Live is awe-some) but sometimes… ya need a break.  Oh, and I'm working on spring cleaning this house some too!

I'm easing a bit more gaming back into my free time routine.  (I can't miss Children's Week!)  I've also been trying to ease back into posting.  It may sound weird, but a hiatus can really break routine and habit.  And I sorta some anxiety about “returning.”  Probably because I've been pretty out of the loop within the blogging community… barely on Twitter (hard when I'm not near my computer while at home)… losin' the feed reader battle … you get the picture.  But, I did my best to not completely disappear.

So this is me trying to catch up and work back into a routine.  Aerissa's story isn't going to write itself, afterall.