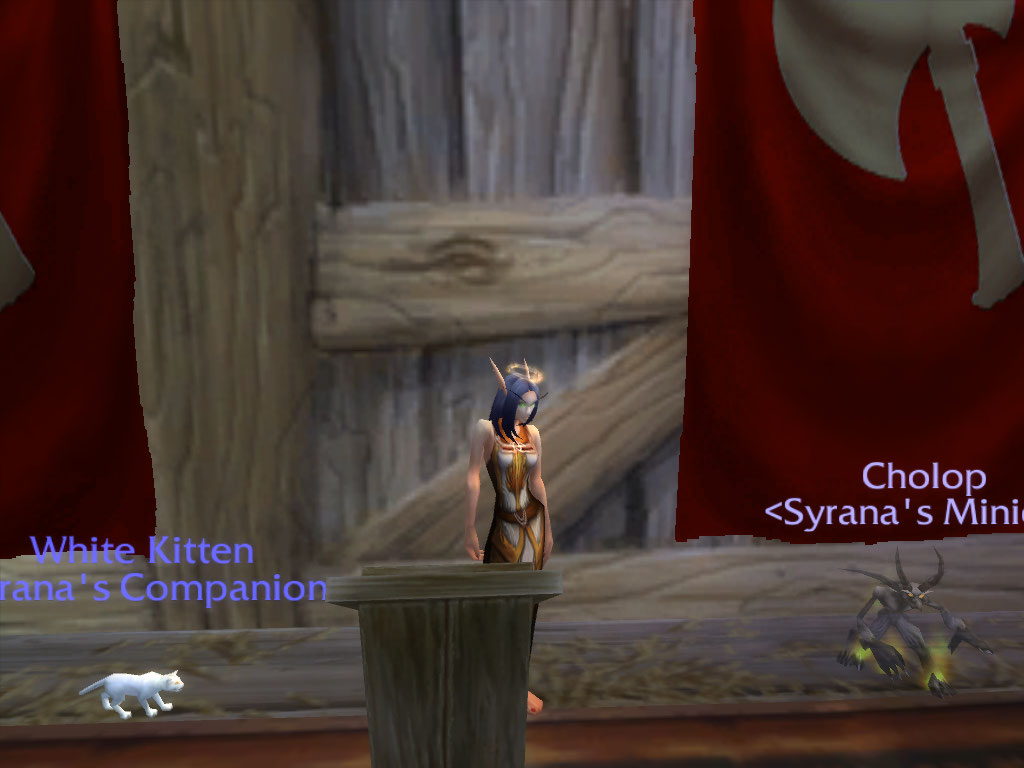 Last week I let you all know that I'm open to answering questions.  I've gotten some through formspring and a few people left great questions in the comments.  Unfortunately, the questions left in the comments were so awesome that the answers needed to marinate in my brain for a bit and fully deserving of their very own post!

So without further adieu… I shall present a wall o' text to you!

1) If you were stuck on a desert island (with power and an internet connection and each other and unlimited pizza rolls and stuff) but could only have ONE video game to tide you over for the rest of your days, which video game would it be?

As much as I love Harvest Moon and World of Warcraft…. I'm going to have to go with Rock Band on this one.  Especially if we could still access new downloadable songs.  *nodnod*

2) If you could design your own video game, what would it be?

I'd love to design an action adventure RPG reminiscent of the old Sierra adventure games.  But what I'd really love is to figure out how to make a Harvest Moon-like MMO.  Like a real MMO, not the MMO-lite of Facebook farming games.

3) What are your five favorite movies?

In no particular order: Mary Poppins, The Black Cauldron, Zoolander, Say Anything, and The Breakfast Club.

4) What are your five favorite books?

In no particular order again:

1- The Chronicles of Narnia by C.S. Lewis — The first novel was required reading in elementary school, but I desired more.  Thus, my parents bought me the box set.

2- Insomnia by Stephen King — I love a lot of King's novels, but this is my favorite.

4- Who Moved My Cheese by Dr. Spencer Johnson — A great book about change and a look at how different people deal with it.  It was an “assignment” at work during a particularly difficult management and department transition.  I'm glad I was asked to read it and discuss it with my coworkers, or I may never have discovered it.

5 – Eye Contact by Cammie McGovern — An interesting novel told through the perspective of an autistic boy who witnesses a murder.  Her descriptions are fascinating and the work his mother does to interpret the changes in his behavior.

6- (I know you asked for 5 but I'm adding another one!) A Wrinkle In Time by Madeleine L'Engle — I read this for school as well and liked it a lot.  It's been many, many years, so I cannot remember if I only read the following 3 books or the fourth one as well.

Goodness, I have a lot of favorite books >.>

5) If you could meet any one famous (but dead) person, who would it be and what would you talk about?

I'm going to have to say… Kurt Cobain.  (Yes, I am a Nirvana fan.)  I'd talk with him about music and his struggles with heroin.

6) If you accidentally ate a magic mushroom pizza and fell into a dazed and pixellated coma, then woke to find yourselves IN a video game, what game would it be and what role would you play?

I'd probably find myself in a trippy Alice in Wonderland-esque game with artwork and music by Rob Zombie and/or Tim Burton.  And… I would play the dazed and confused heroine that tries to find her way back to the Real World.

7) If you could meet any fictional person, who would it be and what would you talk about?

Any of the Fraggles.  We'd talk about life, art, traveling, government, and politics.  It'd be quite a fascinating converstaion that would probably be best suited to occur after I had another slice of that pizza.

Your choice: Going into space or going to the bottom of the ocean. Which?

Going into space! As much as the bottom of the ocean would be neat… I can't swim and there is footage of it that I can look at.  Now space – there's so much out there and who knows what I could discover!

You’re a superhuman with some sort of crazy ability after a freak accident! What happened, and what are you doing about it?

I got trampled by a mosh pit at a metal concert, and somehow the Metal Gods bestowed me with the ability to regenerate broken bones.  I would then take part in more interesting activities that I've shied away from due to fear of injury.  And I'd be a force to reckon with in the middle of the pits.

If you could have an amazing talent to top the charts of that particular thing…what would it be? (i.e. singing, break dancing, drawing, writing, ultimate skydiver of awesomesauce, highest jumper, longest runner, most attempts to stick your head in a sharks mouth and not die, riding sharks for a living, etc.)

I want to say writing, but I think I have a decent foundation to work from on that… so I'm going to go with drawing.  I really want to draw more and am continually disappointed in my inability to translate what I see in my head onto paper.  Plus, then I could illustrate some of my writing.

Phaelia herself comes to knock on your door. She looks a bit tired but oh so happy. She says she’s heard a lot about you and knew you could do it…if you were to accept. Would you ever consider switching from your inner-demon to the ways of a tree loving, healerific soul and run the “new and slightly less scientific resto4life”?

As honored as I would be, I would have to decline.  There is no way I could provide even a fraction of the information she did.  I'd hate for anyone to actually depend on me to guide them on how to keep others alive.  I don't even want to be certified as a CPR/First Aid trainer – the responsibility of me teaching the masses how to save a life frightens me.

If you met Chris Kattan IRL would you completely freak out or is that just me? =P

Ha! I would probably squee because he's funny and a celebrity.  I don't think I'd completely freak out… but who knows? There are plenty of celebrities that would cause me to freak out.  (Sully of Godsmack rendered me utterly speechless and frozen in place.  However, walking past Dustin Diamond at Wal-Mart only caused me to do a double take :P)

I replied that it was blue, but then Tami asked what kind of blue! So, my official answer is royal blue.  (Although I like deep purple as well!)