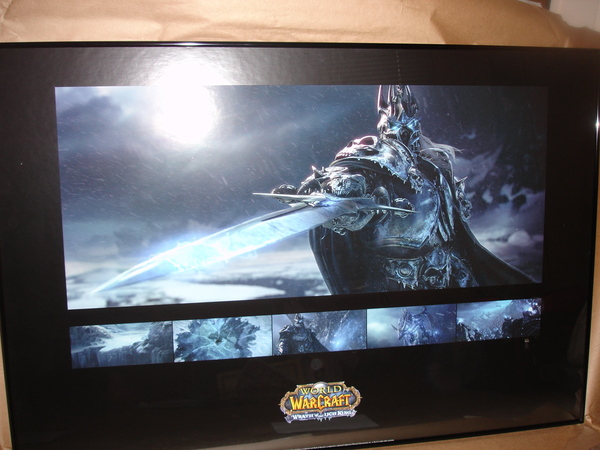 What? BlizzCon Was Over A Month Ago Already?

Then, it really hit me that it was over a month ago.

Remember all that great BlizzCon recappin' I promised?  Yeah…time got away from me and there was just so much BlizzCon related info bombarding us all.

So, here's a mini-recap – the short and sweet version.  (Or, at least, the shorter version than what it would have been had I been on my game after returning home! It's still, uh, a bit wordy…)

What to expect after the cut:

What I already posted:

We did not heed the advice of the wise @Greyseer to get in line early. The line was super long as everyone waited for the doors to open.  We managed to get inside and into the back of the main hall in time for the Opening Ceremony.  As Sideshow and I mentioned on TNB, it was really epic being there for the announcement of Cataclysm and being surrounded with it that weekend.

AT&T utterly failed that first day, so I couldn't tweet or text most of the time.  This prevented me from finding much of anyone (considering I didn't know what most others looked like that were there until later that night).  I mean, it was like being cut off from the world, yet I was surrounded by thousands of people.

It was very weird when we first entered the ‘Con floor.  Outside it was super sunny and bright.  When we first walked inside, it was very dark and took some time for our eyes to adjust.  The ambiance was very gamer-like… as the lighting was like sitting in front of my computer in the dark with my monitor as the only light.

After the Opening Ceremony, we sat through the Preview Panel, which gave an overview of things to come with Cataclysm.  Throughout BlizzCon, many of these areas were discussed more indepth during various other panels.  A lot of the same information overlapped, so it was hard to leave BlizzCon without knowing at least the basics of what to expect in the next expansion.

After the Preview Panel, we were quite hungry.  Actually, throughout our stay, we hardly seemed to eat.  It seemed like we'd miss too much to leave out for food and come back (especially since we were walking).  Before the start of The Guild Panel, we decided to check out some ‘Con food.

We were in line (again) for almost an hour… at least it seemed that long.  (And it probably was.)  I know, I know, I'd heard and read advice about bringing snacks and whatnot.

Well, I packed snacks, but we'd used them for sustenance during our flight the day before and weren't really feeling 'em anymore.  Plus, I forgot to bring the water.  And man, I couldn't find Mountain Dew to save my life while we were out there…but I digress.

So, yeah, we stood in a long line for expensive food that tasted…well, like crap. At least we ate near the hall where The Guild Panel was going to be held, so we were able to find decent seats before it started.  After that was over, we considered hitting up the Cataclysm demos, but there was a bit of a line.  For some reason, we figured it would be less busy the next day.  (Boy, were we wrong, the lines were worse the next day!)

That's when we saw the store line wasn't too bad and did some shopping.  After that, we headed over to The Guild booth to meet the cast and get autographs.

That night we went to dinner with @Greyseer and @Arrens (which was a great time!) before the TNB meetup.  That was a lot of fun, I only wish I'd mingled more.  But, I got to meet a lot of great people, some I got to chat with more than others.  By the time we got back to our hotel it was after 1am, I think, and I was exhausted.

We failed at being early again, but the line wasn't nearly as bad prior to the doors opening.  We sat in on the Breaking into the Gaming Industry Panel, which was interesting.  Basically I took away two things from that: 1-Show you can finish a project 2-Show you can work within an established game world (especially if you are applying to be part of their team).

The rest of Day 2 is kind of a blur.  We sat through the Systems/PvP Panel, went to In ‘n Out, tried to go to the 2nd Class Panel but it was packed, and tried to hit up the Cataclysm demos but the lines were out of control.  It was really warm that day, so we ended up returning to the hotel for a few hours to chillax before the Closing Ceremony with L80E and Ozzy.

Now, we managed to get in the Main Hall where the Closing Ceremony and concerts were held, but we were in the waaay back.  When Ozzy started playing, we could hear him, but not see him.  All the screens showed trippy images, but not the stage… even though the other halls had the stage on their screens.  I would have liked to gone up front, but I was so exhausted and it wasn't my ideal concert setting and ambiance, so I lamed out… and rocked from my seat.

After that, we met up with bloggers and twitterati for more antics at The Sandbox (Desert Palms Hotel's bar & grille).  Unfortunately, they decided at some point to tell us their kitchen was closed, even though others were getting served… the drinks dried up… we hadn't eaten since In ‘n Out at lunchtime.  By about 9pm Sideshow and I had to find food.

But every nearby place was packed.  Every eating place we could see had lines out the doors – even Subway! The shortest line was at 7-11.  Yeah, so that wasn't much of a meal.

It was a blast and quite the experience.  There are things I regret doing (eating con food) and not doing (playing demos).  The best part was the people meeting. I do wish I hadn't felt as shy while in lines and waiting for panels to start though.  I mean, there were some random people we exchanged idle chitchat and jokes with… but most of the time in lines… it was like people were kinda grouped up.

So… I have a TON of mini-cards leftover.  I barely gave them out.  Other than at the meetups, it never felt like “the right moment” to hand it over.

The short version – I'm excited for nearly all the changes.  I'm still ambivalent, or rather indifferent, about the soul shard changes. Sure, I want something to be done with them, but until I can see how it actually plays out, I'm reluctant to give an assessment on it just yet.

How'd I Do It Different:

We certainly are interested in going again. We know it's hard to plan too far in advance since the time of year it is held can vary, plus there's always the ticket boss to consider.  But, I think we'd plan much like we did this last time – book a hotel and flight once we know the dates and hope for the best on tickets…there are always meetups outside (and other things to do).

Knowing what we know now, we'd definitely choose a closer hotel.  At the time we made reservations, our mile away hotel didn't seem so bad.  But, the reality of all that walking and the cost of cabs…which is why we walked so much…we know some better picks.

I'd also be able to prioritize what I want to do inside better, after seeing how it just was NOT possible to try and do it all, no matter how hard I tried or had my lil' heart set on it.

Also, I think I'd try to enter a contest…maybe put together a costume or do the female Orc dance. 😉