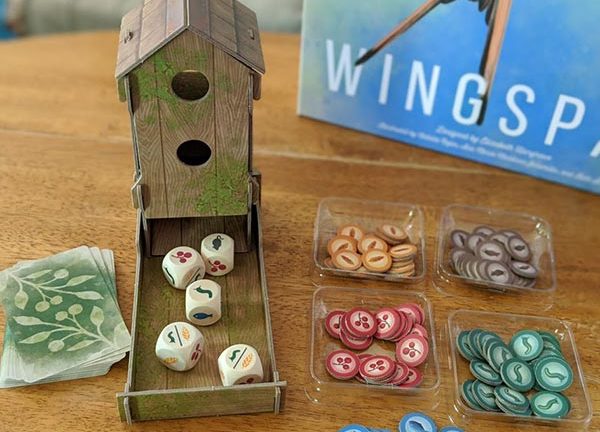 Do you enjoy bird watching? Or like playing strategy games with an interesting theme?

Learn what makes the Wingspan board game such a good, satisfying game to play with others or solo.

Thanks to Stonemaier Games for providing a discount in order to purchase the game for review.

For more great family board game options, check out Everyone Loves a Parade, Zombie Kidz Evolution, and this list of over 100 games for family game night.

This post contains affiliate links, which means we may earn a commission if you make a purchase.

What is Wingspan the Board Game?

Wingspan is a tabletop board game for 1-5 players designed by Elizabeth Hargrave, an avid bird watcher, and published by Stonemaier Games.

Each player works on attracting different types of birds to the habitats on their boards.

Each bird has powers inspired by it's behavior in nature. Bird cards also include information about the type of nests they build, food they eat (in general terms), their wingspan, which continents they live in, and an interesting fact about them.

It is considered an engine building and tableau building game. The combination of bird powers that can build resources and points more efficiently throughout the game, and this is built upon your own player mat without directly interfering with other players.

There are also goal objectives and bonus objectives to work towards as well, providing a few different strategies for earning points.

The game plays in about 40-70 minutes, depending on the number of players.

How to Play Wingspan

I'm going to give you a general overview on how to play Wingspan to give you a sense of the gameplay. Please refer to the rule book for the complete set of official rules.

The new editions of the game include the Wingspan: Swift-Start Promo Pack, which walks players through the first four turns of the game.

I highly recommend using this the first time you play as it is a great way to learn the game. Once you know the game, it's easy to teach others how to play by diving straight in without the Swift-Start Pack.

After setting out all of the game components, give each player 2 bonus cards, 5 bird cards, and 1 of each food type for a total of 5 food.

Next, players will then choose to keep 1 bonus objective card and discard the other. Players will also need to decide which cards to keep and pay 1 food for each.

It helps to keep in mind which food is needed to play the birds in your hand and look for birds that satisfy your bonus card.

The game is then played through multiple turns over four rounds.

Players must choose one out of four possible actions to do on each turn:

Place a cube on the first open space (going left to right) for the action you have chosen.

To play a bird, you must have the correct food tokens as shown in the upper left hand corner to attract it to your habitat.

Playing birds in the first column only have a food cost. Later birds will have an egg and food cost.

If the card has a “when played” action, follow the directions immediately after placing the card on your player mat.

To gain food tokens, place a cube in the first available space on that row. Then select the number of dice shown on that space from the bird feeder dice tower. Set that die (or dice) outside of the bird feeder and add that food token to your supply.

Then move your action cube to the next spot on the left. If a bird card there has a brown highlighted power, it is activated. Then keep moving left until you place your cube on the space that says “Gain Food” and your turn is over.

You will need eggs in order to play more birds, complete round goals, and earn points at the end of the game.

Then move your action cube to the next spot on the left. If a bird card there has a brown highlighted power, it is activated. Then keep moving left until you place your cube on the space that says “Lay Eggs” and your turn is over.

When doing the draw cards action, you may choose from the three face up cards in the bird tray or blind draw from the top of the deck.

Then move your action cube to the next spot on the left. If a bird card there has a brown highlighted power, it is activated. Then keep moving left until you place your cube on the space that says “Draw Cards” and your turn is over.

At the end of each round, one action cube from each player is placed on the round goal scoring track.

This gives players fewer turns in later rounds, but ideally have played birds with powers to activate during their turns.

After the fourth round, it's time for end game scoring.

How to Win Wingspan

To win a game of Wingspan, you will need to play bird cards with high point values while also working towards round goals AND your bonus objective.

Be careful not to focus too much on only one thing or you may miss other opportunities for points.

There are two different difficulties for round goal scoring.

The blue side is great to begin with because the points are based on how many each player has met. The green side adds a challenge by scoring based on who has the most.

The game includes a score pad to add up bird points, round goals, bonus cards, eggs, cached food, and tucked birds. The player with the most points wins!

Upon opening the box, the first thing we took note of was the excellent quality of the game pieces and even the rulebook.

The colorful miniature eggs are a great touch. The food tokens are probably the lowest quality components in the game, but they are still a nice thick cardboard.

Beautiful design is another thing you'll notice immediately. The bird cards look fantastic. Our games take longer than they should simply because we spend so much time looking at the cards.

I know a game about birding may seem boring, but I find some of my favorite strategy games have themes that don't particularly sound exciting.

Plus, I love that Wingspan is a board game created using scientific information. That the bird powers are based on real life behaviors and not just some random game action.

I've played Wingspan with only two players as well as with four, and I've played the solo variation. The game was just as fun and challenging regardless of the player count. After playing the solo version, I told Brian how much my brain enjoyed the challenge.

Wingspan is not difficult to learn how to play, but it provides enough challenge to keep my brain engaged through multiple plays. With all the different bird cards and combination of bonus objectives and round goals, it doesn't feel like the same thing over and over again.

Although we do not consider it a quick game to play, the gameplay doesn't feel long. In fact, you may end up wishing there was more time to build up your player mat!

We enjoy this game so much the kids are already asking about expansions for more bird cards. So, we will probably be grabbing the Wingspan European Expansion soon.

Can You Play Wingspan With Kids?

Yes! You can absolutely play Wingspan with kids and I highly encourage you to do so.

The game states for ages 10+, but we have played it with our kids who are 9 and 7 years old. We helped coach them through their turns a lot at the beginning, but they quickly caught on to how the game works.

I do recommend you play the game with another adult and become familiar with it before teaching the game to your kids.

It's a wonderful opportunity to have them play a game based in science and get them interested in learning more about birds. We've been paying closer attention to the birds we see and hear in our neighborhood.

Where to Buy Wingspan Board Game

Look for Wingspan at your local board game store (FLGS), order directly from Stonemair Games, or find it on Amazon.