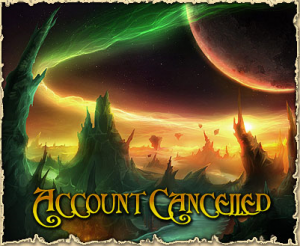 When I was in elementary school, for some reason we thought the idea of being “cancelled” was funny.  One of my friends got ahold of the librarian's “cancelled” stamp and would go around cancelling our classmates.

Today, that memory still makes me chuckle under my breath and shake my head, but I don't want my fellow bloggers getting cancelled.  We've lost a few already (and you know who they are) and now I'm worried about my favorite Gnome.

Have you ever seen this [account cancellation] screen before?

What brought you to this point?

I have seen that screen before, but only once and that was about a year ago.  I was brought to that point from a combination of things: raid schedule conflicts (so I couldn't raid), lack of guild cohesiveness, guild and server drama, burn out from grinding, and not being on the same server as my husband to help combat the boredom.

I've felt some burnout, received motivation/encouragement, and had other games catch my attention.  But, only once did it lead to me cancelling.  Other times I have taken breaks of anywhere from a week to two months, but never had I cancelled.

When you did it, was it:

Before I cancelled, I honestly thought about deletion.  I decided deletion was too permanent and recognized I was acting upon impulsive feelings of frustration.  When I cancelled, I did not know if it was going to be permanent or not.  It was mainly a temporary decision with an unknown return date… so that the option was still there.  But, since it was going to be an undetermined amount of time, I didn't want to be auto-resubscribed.

How did you feel:

I felt a bit conflicted when I was completing the process.  I felt the survey lacked enough options to express the decision.  The choices felt too few and compartmentalized.  After it was done, I just felt good knowing I wasn't going to get charged if I didn't get back in the game soon.  I still thought about my characters, their stories, my experiences, and perused WoW related postings.  It was pretty easy to be out of the game overall since Sideshow was taking a break as well.  Well, I think he was still playing some, just not as much… I can't remember now if he was easing back in after a break as I was taking mine or how that worked out exactly.

How'd I feel a week and a month later? Well, I don't remember exactly, but it wasn't anything out of the ordinary.  I remember getting into console games and back into Sims 2 during that time.

One thing is for sure, after I tried Warhammer Online, I was not hesitant at all about cancelling and never looking back.  But, maybe that's because I went into Warhammer knowing it was a fling and I was still seeing World of Warcraft on the side?

Assuming you returned to WoW:

The longest break I had taken before the cancellation was 2 months.  Although, it wasn't really 2 months entirely.  I'd log in to pick up my gems in Nagrand and chat with a couple people, but was on for probably no more than 2 hours for a 2 month stretch.  The cancellation “break” lasted almost 2 months.  I think it was really only 1 month in terms of when the sub ran out.

I ended up getting bored with single player games.  They just don't hold my attention or enough playability/replayability options for me.  I also missed the social aspect… but I knew I didn't want to return to be with the same people.  I'm not “old,” but I was one of the oldest in that guild.  I needed to find a better fit for me.

So, Sideshow and I had been talking about his burnout but also about his new guild.  He had joined it probably a month or so before I cancelled my account.  We also talked more about how it was a bummer we couldn't be running dungeons together because our 70s were on different servers.

Then it hit me.

I went into my account and resubscribed.  I logged onto my characters and packed their bags.  I transferred Syrana first.  Sideshow and I had a blast doing dailies together (I hadn't fully seen the Isle come to fruition when I bailed).  I applied for his guild and was accepted in.  I'm still with them (and an officer to boot!) today.  Then I transferred over a few more characters and deleted the rest on that server.

I was finally “home.”

Do I still get burnt out and restless from time to time? Sure do.  No matter how balanced my life is, there are times you just don't want anymore cookies, y'know?  It's not WoW's fault, it's not anyone's fault.  It just happens.  But, I can tell you that finding my guild made a huge difference in my enjoyment of the game.  Being in the previous guild was like an emotional rollercoaster.  (And I subjected myself to that by returning to it 6 months after gquitting, heh.)

So, Gnomer, people can come back… or maybe I just never really left?