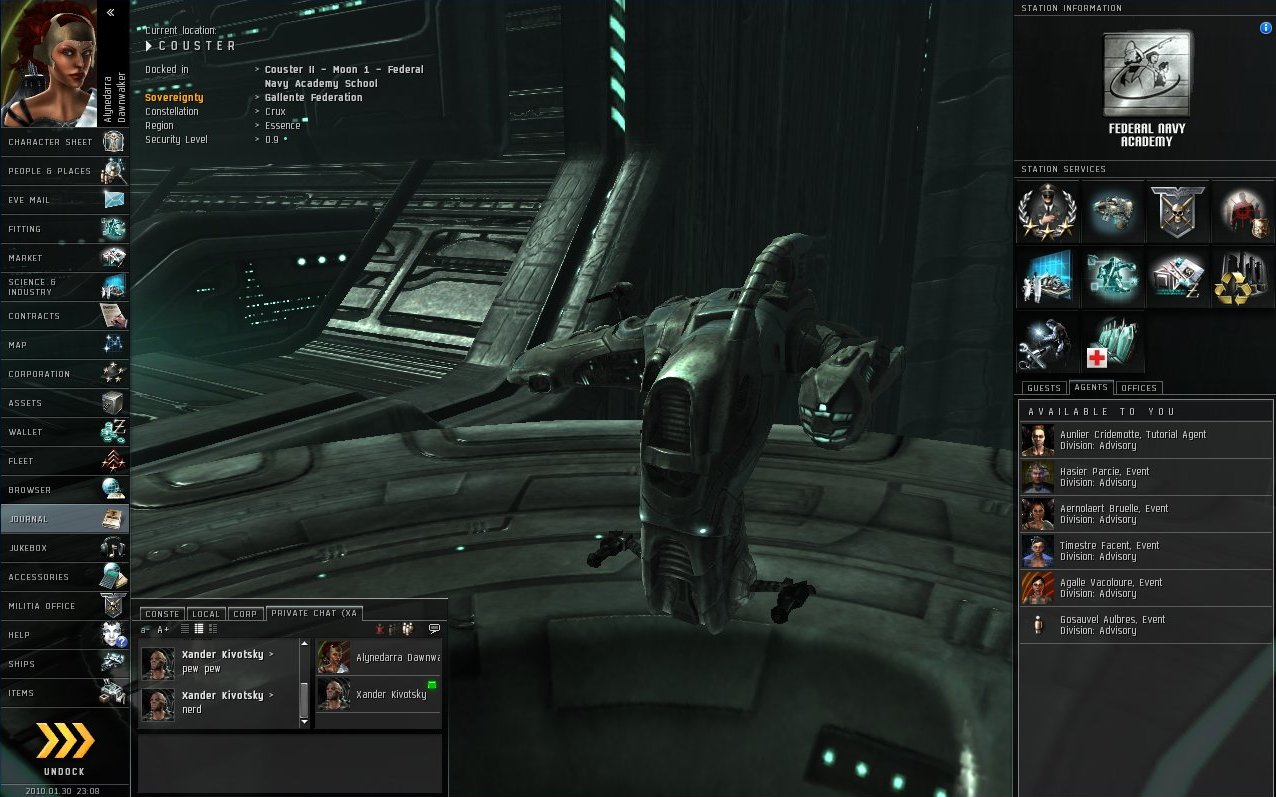 Into The Stars: Syrana Ventures Into EVE Online

The world isn't big enough to contain me.  I must seek domination far and wide.  Space is a good place to seek ultimate domination.  Not just world domination – but universal domination! Wait, even bigger than that!

Although, a noob like me in the vast and complex outerworld that is EVE Online probably won't see any domination… yet.  (Never underestimate a warlock.)

Ok, so, there aren't warlocks in EVE.  But! I am IMMORTAL! Mwuahahaha!  (See, it pays to live off the souls of lesser opponents.)

Let me start at the beginning-ish.

Sideshow has been playing EVE Online on and off for a couple years.  So, the game isn't a completely new concept to me.  I know bits and pieces about it from discussions with him and reading various gaming articles/posts here and there (usually big news stuff).

I've been intrigued by this outerworld for quite sometime, but have been gunshy to attempt it.  I mean… wouldn't this make you nervous to dive into something new:

The game does have a higher learning curve than most of the MMOs I'm used to.  But that doesn't mean it has to be a big scary place… or does it?

Here are the concepts of EVE that have intrigued me:

As you can see, more things intrigued me about the game than deterred me.  So why did it take so long for me to finally try it? *shrug* I dunno, but I'm trying it now!

Make Me A Demi-God

I fired up Sideshow's second account and created a character.  The look of my character is really just for the portrait, I learned.  I'll pretty much only see my ship, stars and planets.  For the lack of scenery as compared to say… World of Warcraft or Aion, EVE it is still very pretty.

I chose my race, bloodline, and ancestry.  I learned a bit about what those mean and selected what I felt suited my character.  From my understanding (and I could be wrong) what you chose for those used to have more of an impact on your skills and thus your career path… but now it doesn't impact as much or as harshly as before.  Basically, I shouldn't have to worry that I “messed up” and can still customize my skills and career the way I want.

I started off in the starting zone and Sideshow informed me that they have added a tutorial for new characters, which they didn't used to have.  That was probably one of the most daunting things about the game at the beginning – you log in and are just kinda there… in space… without a clue how to proceed unless you did a bunch of research outside of the game.  This is where EVE University came into play – they help teach new players.  (I plan to apply for it myself, just haven't gotten that far yet this weekend.)

The tutorial was handy in helping me learn the very basics – such as flying, fighting, and looting.  Believe me, those things are VERY important.  I was a bit confused though because the tutorial didn't kick in until I undocked from the station.  Sideshow was going to show me some basics since the tutorial hadn't popped up yet, which led to me undocking.  BUT, once I undocked, THEN the tutorial started.

I coulda sat for hours wondering when it was going to start.

Then again, I couldn't really do anything in the game until I undocked… so I guess it was fine.

I am very interested in the exploration career path, and will probably be working on that.  (Scanning for anomalies and uncharted areas of space!)

There really is a vast amount of information for this game.  There is SO much one can do.  You can really carve out a niche for yourself.  (The idea of being a ship that smuggles certain goods around sounds cool, but I'd probably die a lot….)

The one thing I've taken away from the few hours I've put in so far is this – even though there is a lot to the game, you do not need to know the ins & outs of every facet to play it and enjoy it.  Basically, you need to know how to do what you plan to do or want to do.

I still feel a bit of information overload right now, but in time, I will feel more comfortable with the basic controls.  I just have to get used to them.  And there is nothing wrong with that.