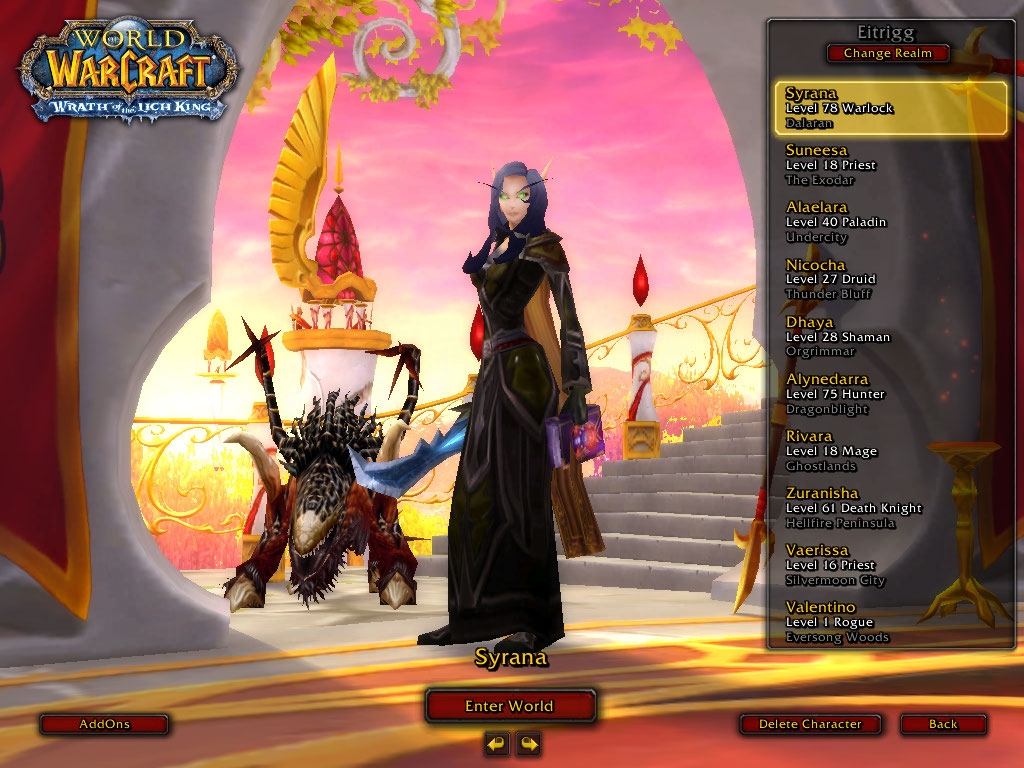 At least, that's how you all know me.  Fulguralis over at Killing 'em Slowly has created a new meme of sorts to get to know the bloggers naming styles.

Rules: Tell us how you select your character names (even if it means digging out an old post!) and tag 3 other bloggers. Thee who have been tagged shall be revealed at the end.

But, would you believe I have not always been known as Syrana? Some people use similar handles, monikers, toon names in a variety of games over several years (points at Sideshow).  Once upon a time, waaay back in the good ol' BBS days (which I plan to post some fun flashback stuff about!) I was known as Nofear.  That was my handle and character name.  Wouldn't quite apply to my Warlock too well, would it? Heh.

Then I did a spell of using a combination of my real name and my favorite flower and you'd see Darsadaisy or Dayzee all over the place.

Then enter World of Warcraft.  A whole new realm (my first MMO) and a new way of looking at “character name.”  Some of you may know I have a pet peeve about names I see in game.  There are many that would be appropriate enough as a “handle” but not a character's name.

I actually use the random name generator (RNG) for a lot of characters, but may tweak it a bit to fit my flavor.  But when I do use the RNG, I flip through A TON of names first.  I'll keep in mind a few I sorta liked and may combine them in some way.  I know some people use a naming system where it's pretty easy to identify their alts to them, but I do not.  This is not because I don't want people to associate the characters to me or my main, just, I want their names to be as unique and independent of each other as they are.  (I do, however, use an addon called Identity2 to make it clear in guild chat that it is I, Syrana, that is on alt #9001 in case they are in need of an officer.)

So, I guess, on with the names?!  I will just go over toons on my main server.  The naming devices are the same whether I play a toon a lot or once every 5 months 😛 (Although, a few names I have looked up were sorcery related names and Russian names for my space goat DK.)

Syrana – A very popular name in WoW, according to the armory.  I actually (sadly) did not name this toon myself.  I originally rolled her for RP purposes to be the child of another player.  Although I was able to pick the class and look, she selected the name.  But I liked it and kept it.  And amazingly, it was not taken on the old server or on Eitrigg when I transferred her.

Alynedarra – RNG actually and she's the only one in the armory.  Although, this particular toon was not originally named Alynedarra.  She started out with Aerissa (from the story, yes!), but it was taken on Eitrigg when I transferred her.  (And taken by someone under level 10 and doesn't seem to really value this ultra popular elf name!)  But, I'd had a different alt named Alynedarra (since delete'd) and always liked how it sounded and shortened up.

Dhaya – Pronounced Da'ya.  Was originally Dayah, but Dayah was not available when transferred, so, we just moved the silent “h.” 😛  This was a combination RNG and sounds I wanted with the name.

Alaelara – Created by me while thinking of Aerissa and Alynedarra.  I somehow came up with this.  I like how it sounds and rolls off my tongue.  This was the name I chose for the main toon I rolled during my two month stint of Warhammer Online.

Rivara – A name I thought of that sounded neat and paired well with Aevara.  They were supposed to be my dual box twins.  Aevara was a combination derived from Aerissa and Rivara.  Also, I wanted to come up with something that did not start with an A.

Zuranisha – RNG developed, but took forever before I found it.  I've used the name a few different time for trolls that have come and gone.

Nicocha – RNG for a Tauren I had rolled on a far off server when my own was down.  I liked the name and reused it when I rolled my lil' druid on Eitrigg.  We then encountered an interesting experience of being told by Blizzard that the name was a violation for being sexually violent.  So, the guild tried to figure out what the hell the name meant.  (Means nothing more than what we made up for it!)  In actuality, the email was routed to me by mistake after I had reported a very offensive name while playing Nicocha. /facepalm

Vaerissa – Not sure I even have to tell you.  You probably can tell by looking at it… that I wanted to get around the unavailable Aerissa and stuck a V in front, since it seemed to be the only letter that made it sound ok!

Valentino – So he hasn't made it passed level 3, but just threw this in the list for fun.  I selected this name specifically for creating the in-game Valentine's Day cards for our guild event.  I was a bit surprised it was even available.

To really answer Fulg's over arching question: Yes, I put quite a bit of thought into the names of my characters.  Some names I've grown so attached to that I reuse them or create “mutations” of them.  But, I can never create a character with just any ol' name.  Sideshow can attest to the amount of time I've spent sighing heavily while flipping through the random names and complained about how I “thought of the perfect name I reallyreally liked but I can't remember it now….”

The names I really wanna know about are: