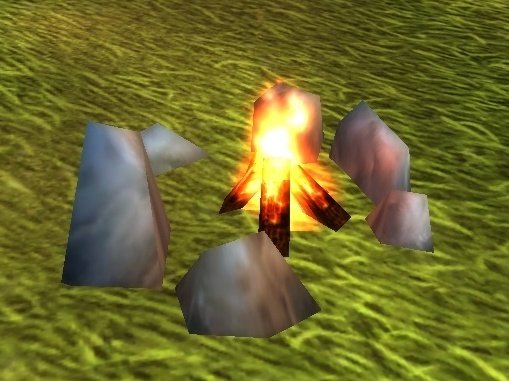 No Fuel for the Fire, Midsummer Fire Festival Review Part 2

Previously I posted a review of my positive experiences with the Midsummer Fire Festival this year… all about the gold, blossoms, goodies, title, experience, etc.  I had also mentioned I was a bit disappointed this year as well.  Here's why… the lack of PvP.

Yup.  That's right, I was disappointed by the lack of fighting at and around the fires.  Granted, I did not steal the capitol city flames this year (except Darnassus), but c'mon!

This year I only died (caused by player deaths, not guards) a total of 4 times on 3 different characters.  I only killed about that many players as well.

Syrana died once outside Razorhill.  I was helping a lower character that was being attacked by an 80; however they had back up.  What was funny though, was that their backup left by the time I rezzed.  They had resumed attacking the lowbie when they rezzed, so I finished that druid off.

Alynedarra died once outside Goldshire.  That death was kind of cheap since there were 3 80s that flanked me after I put out their bonfire.  I knew I stood no chance, but at least it was entertaining.  Well, having them eat my dust was entertaining.  See, they didn't understand the fine art of proper corpse camping.

See, all 3 of them circled around my corpse, waiting for me to rez.  Well, I'm no dummy.  1- I'm not going to pop in plain view.  2- We're on a PvE realm.  I waited for my flag timer to run out, then rezzed behind them, giggling.  I almost thought they were going to follow me to Sentinel Hill, but they went back to dueling each other.

Then there was the boat ride out to Azuremyst.  I'm on the boat, flagged.  A level 80 gnome rogue gets on the boat and stands next to me.  At this time, Sideshow was supposed to accompany me, but he fell off the pier at Darkshore.  Anyhow, I watched the rogue and watched him go to the far end of the boat and stealth.

My PvP senses started to tingle.  My fingers got a bit twitchy.  The boat leaves before Sideshow can get back on the pier and onto the boat, but I don't jump off.  I ride on the big blue watery road.

But then, oh my goodness, I see there are some more Alliance waiting at the dock on Azuremyst Isle.  1 80 druid and 1 77 priest.  I think to myself that I'm going to get jumped.

But no one touches me.

I ride out to the wee little bonfire and put it out.  I hang out on my Talbuck as I wait for Sideshow to catch up with me.

Then I feel something in my back.

That rogue decided to follow me after all and attack.  Too bad he sucked.  He couldn't dismount me or keep me stunned while I bled to death.  No… he managed to bring a chunk of my health down, but then I galloped away laughing gleefully.

Zuranisha died once outside Hammerfall.  After honoring the bonfire, some pesky Alliance came up and wee'd on it.  They were a few levels lower, but hey, they were flagged and did it right next to me.  So, I killed them.  As I was landing the finishing blow, I notice I'm getting zapped from behind… by a shaman 7 levels higher than me.  I gave them a run for their money though and brought them down to at least 30ish%.  After I died I noticed something that made me blush, giggle and facepalm.

I never re-did her talents after the last reset.

That's why I was disappointed… usually there are more PvP encounters when I visit the fires.  I mean last year, oh man, last year was awesome.  Do you know how many times level 10s attacked my flagged butt? Then I cackled as they fell over dead from a whack with my staff?  Oh! And let's not forget the Alliance escort NPC I killed as we headed into Auberdine.  Oh man, that level 17 was pissed.  They whacked me out of anger (mind you, I had 3-4 other high levels with me at the time, so it was really a foolish move!) which resulted in me killing them.