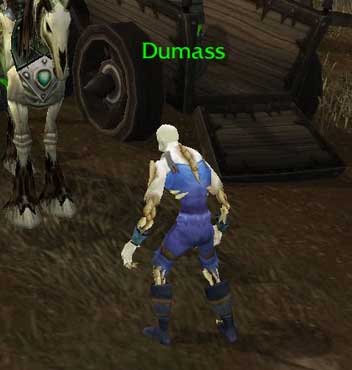 Welcome to the Machine

There are a ton of great quests in Cataclysm. Blizzard definitely went all out. I really enjoyed the Worgen starting area. The quest line there felt epic and the story was well written. The Goblin starting area was great. They made it really fun with a lot of nice little hidden gems, like the Goblin Supermodels in Kezan having a gasoline fight (ala Zoolander.) The quests in both areas were unique and kept you busy without the repetition we have been used to.

The only other starting areas I've ran through were the Trolls and Gnomes since I wanted to see how those panned out. I enjoyed both of those, too, for different reasons.

I just recently ran through the Undead starting area. It's always been one of my favorites. I like the atmosphere of those areas. Very creepy, with just a touch of life. The other reason is that is was the first area I ever ran in WoW, back in 2005 with Sideshow. It'll always have that nostalgic feel to it.

I like the changes they've made, aesthetically, to Tirisfal Glades. Brill is much nicer now, not only with “new” Undead architecture, but with many more facilities and even a flight path. The quests in Deathknell have more to do with life after Arthas' reign and Sylvanas building an Undead army. Once you're out of Deathknell, a lot of the quests are similar to what they were, but they are much easier to run through now. Everything is laid out better and the flow was really appreciated.

Silverpine is also completely overhauled. The Sepulcher has received a complete makeover and is now a full-fledged Undead center of command. I really liked the Silverpine quests because they bring you more into the Undead's history and their march into the future. You're working directly with Sylvanas for most of the area while fighting back the Worgen from Gilneas. It makes you feel like you're directly affecting the outcome of that area. Great job on the phasing and quest design there.

Once you're done with Silverpine, you go into Hillsbrad. In my opinion, Hillsbrad has, hands down, the best quests in Cataclysm. There is no doubt in my mind. I can honestly say, I've never laughed so hard at a quest in WoW. Starting with the first quest you get, Welcome to the Machine, you get to be a quest giver and you meet three very interesting (very real, some might say) NPCs. I can't give away anything, otherwise it's not as fun. Just go do it. (Otherwise, you can be a party-pooper and read the dialogue on the Wowhead link.)

Once that's  done you will get to meet your questers (questees?) again on your travels through Hillsbrad. The area is also very well-done. No more dealing with (a high number of) Alliance gankers (if you've ever tried to quest here on a PvP server.) The Alliance has officially been removed from the area, at least town-wise.

It'll take a lot to overthrow that line of quests from the throne, but I'll keep trying the new areas. What was your favorite quest/quest line so far?