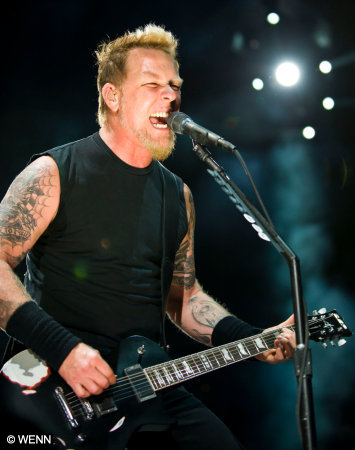 The vocals in the music I listen to is usually one of the things I weigh high on my list. I need to enjoy the vocals or otherwise it can ruin the whole song, or sometimes even the whole band, for me. My main rock vocalist requirement is usually what I like to call “soul” in their voice. I need to feel the power and emotion behind their voice. A weak little voice is usually obvious to me and I am usually turned off by it.

Remember, this is my list of vocalists, not a list of the top vocalists of all-time. I decided to only choose vocalists who are still alive and active, rather than from all-time. This will actually come into play on one of the vocalists I put into the “Honorable Mention” section. They are also not in any particular order. (Most links are YouTube videos, but they should just pop-up and play and not require you to leave that page.)

James, if you live under a rock, is the rhythm guitarist, co-founder, and vocalist of Metallica. He is sometimes used as the quintessential thrash metal voice. His raw power and emotion can easily be heard in his singing style. Also known for his use of the word, “Yeah” as seen in this cleverly created SoundCloud clip. You can follow his vocal journey by listening to the Metallica albums in chronological order. His vocals on the early stuff, like Kill ‘Em All, is not quite as powerful, almost whiny, but he has come into his voice over the years. He can even bring out the emotion in songs like “Nothing Else Matters.”

Hear it yourself: Metallica – “The Day That Never Comes”

The one on the list that may be new to a lot of you. Russell Allen is mostly known as the lead singer in the progressive metal band, Symphony X. He also sings in the heavy metal supergroup, Adrenaline Mob, with Mike Portnoy. He is known for his powerful and versatile voice which he can use to sing in the normal, gruff heavy metal style, or belt out those high notes.

Hear it yourself: Symphony X – “Set the World on Fire”

Sully Erna is best known as the singer in Godsmack, though he also released a more mellow solo album in the last few years. He is a little guy with a great big voice, perfectly fitting of the metal genre. Again, like James Hetfield above, he can be powerful for those metal anthems and slow and mellow for the slower songs.

A somewhat new entry in the rock field. Lzzy Hale is the frontwoman and co-founder of the rock band, Halestorm. Not being sexist, but it does take a lot to be a female rock/metal singer and keep up with all of the well-known male vocalists. Male vocalists usually just have more “power” behind their voices due to genetics. Lzzy is one of the few exceptions as she has raw power in her voice that doesn't back down from those other male vocalists, yet when she needs to sing mellow, the male vocalists can't even keep up with her.

Mikael is the frontman for the progressive metal band (also described as progressive death metal), Opeth. I find his voice very unique in the death metal-type genre as he switches flawlessly between both clean vocals and growled vocals (aka Cookie Monster vocals.) I've never been a big fan of the deep, growling vocals until I heard Opeth. Mikael does it so well that it feels right and fits the song. If you would show someone a song he sings with clean vocals only and then one with growled vocals, they would never suspect it's the same man. Also, he seems so happy and timid in his interviews, it's weird to watch him growl like that.

Hear it yourself: Clean vocals: Opeth – “Burden” — A mix of both: Opeth – “Ghost of Perdition”

Vocalists that just didn't make the cut for one reason or another, but I still enjoy.

As always, I probably missed someone, even on my own list.