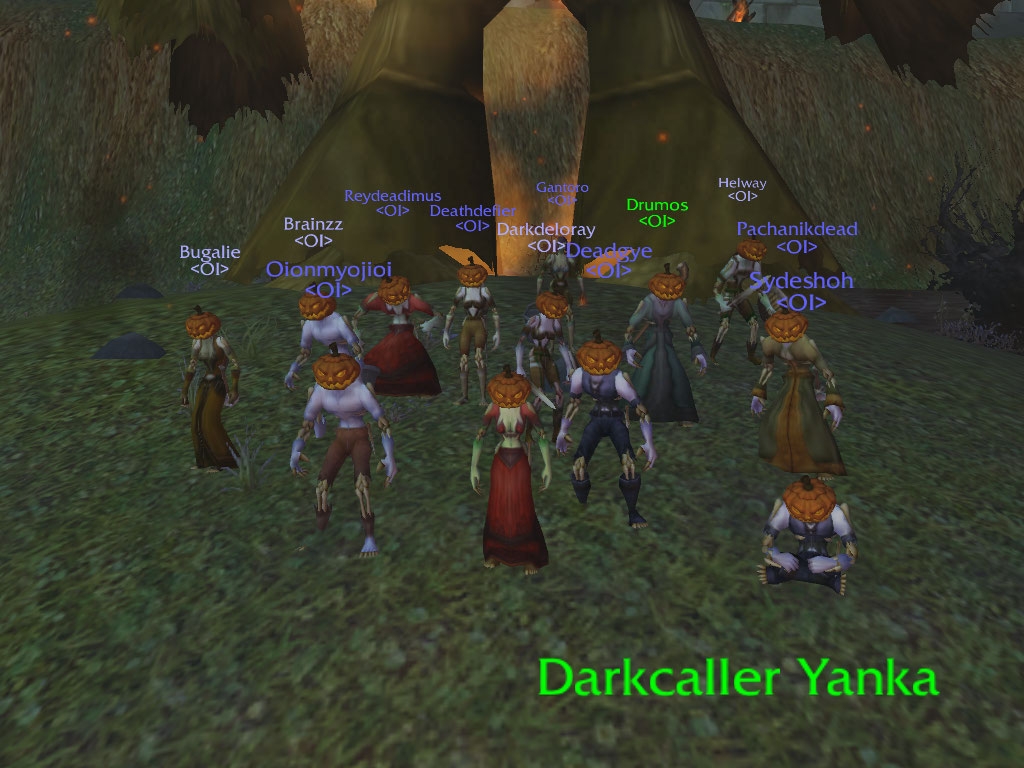 *Everyone in unison* Hello Syrana.

To be honest, I am surprised to see there is a controversy over the Bunny Maker achievement for Noblegarden.  Some claim it is sexist, offensive, and in poor taste of the developers.

Excuse me, any meaning or offensiveness attached to it is done by you.

Was it a tongue-in-cheek pop culture reference? Sure.  Did that mean the developers were intentionally trying to be offensive and objectify women in game? No.

The meaning that achievement has is attributed to the meaning you give to it.  If you find it offensive, you have made it offensive to yourself.  No one can make you be offended unless you allow yourself to be offended. Sometimes it is hard not to be, but it still comes down to how you perceive whatever the situation, phrase, word, image, etc. is.

Are there things that exist in this world that the majority of people allow themselves to be offended by? Yes.  But, that goes to widespread knowledge of the meaning attributed to such things.  Unfortunately, it is possible to be offended by everything if you look hard enough into it.

Let's take a couple perspective angles on this achievement, shall we?

1 – The holiday is centered around rabbits, bunnies, and spring time. Collecting eggs can change you into a little rabbit.  A special branch can change you into a little rabbit.  A special bouquet of flowers can give you bunny ears if you shake it at yourself or someone else. Anyone that has the flowers (the bunny maker) shook at them can right click the buff to remove the ears.  You can shake your flowers at anyone to give them ears, how fun and silly!  For the achievement, there have been some restrictions placed upon it to make it more interesting and challenging.  Ooh, level requirement, well, that way someone can't just create level 1's.  And gee, it doesn't take long to level to 10, so let's make it a bit harder to create and level a character specifically to help friends find female Orcs.

2 – The holiday is pulling from traditional roots about spring and fertility.  Flowers are new growth.  Use them to bestow gifts of fertility to women. This is an honor, not only to women seeking to bring forth new life, but as a way to honor the life bringers.

3 – The achievement focuses on objectifying women by forcing bunny ears on them as if making them centerfolds for Playboy. This can only be done to female characters of at least the 18th level because then they are old enough to pose for Playboy.  It is allowing female characters, which are sometimes played by women, to feel harassed and stalked. Not everyone wants the bunny ears forcibly placed upon their head.

4 – The holiday and achievements use an interesting combination of modern day Easter religious and cultural celebrations, traditional pagan celebration, and pop culture references.  The holiday and achievements are meant to be fun and silly without pushing any thoughts or beliefs upon any of the players.  Levels of humor are similar to movies such as Shrek where there are jokes for children as well as adult jokes that only, well, adults would understand.

What about other achievements?

Other holiday achievements require bestowing (or ‘forcing') something onto other players whether it is snowflakes, rose petals, bunny ears, or pumpkin heads. Each of these have certain criteria that must be met to accomplish them because it is not an achievement to simply put them on just any one.  Heck, I liked that I could actually use the flowers on myself!  One requires certain races, one requires certain race/class combinations, and now we've seen one that requires a race/sex/level requirement.  These requirements have to mix it up or the achievements are all the same.

Some have referred to searching for female characters as harassing and stalking, especially if they are a rarer one to find. Well, then should I feel harassed and stalked during Winter Veil because I was constantly having snowflakes thrown at me due to being a Blood Elf Warlock?  Should Sideshow have felt harassed for getting them for being an Undead Rogue?   Should I have felt harassed because I'm a woman and Sideshow not because he's a man?  What kind of stereotypes were those achievements playing off of?  Where do we draw the line?

If you did find Noblegarden and it's achievements offensive, I am truly sorry to hear that.  I am not saying you shouldn't feel that way.  That is you and your feelings are not wrong. What I don't like is when someone feels offended and tries to tell others they should feel offended, or they accuse Blizzard of objectifying women and alienating their female players.  Why are you trying to assign intention?  How can you assign the intention?  We can all come up with what we think their intention was, and we'd come up with several different answers.  So, here is where I want to call bullcrap.  If that was the case, there would be much more and much worse going on in the game… and MORE women would have a problem with it, as would more men.

Now, with all this focus on women and sex and bunnies… who has an issue with the violence and fighting in the game?

*shrugs* Selective offensiveness? I don't know.  I am just presenting my thoughts because Sideshow is sick of hearing me mumble and spout things at him when I read posts about this topic (no matter what their view is.)  But, I would love to hear your thoughts, if you want to share.  Did you have an issue with it? Do you know someone that did?  Or is it ‘sort of' ok in your book?