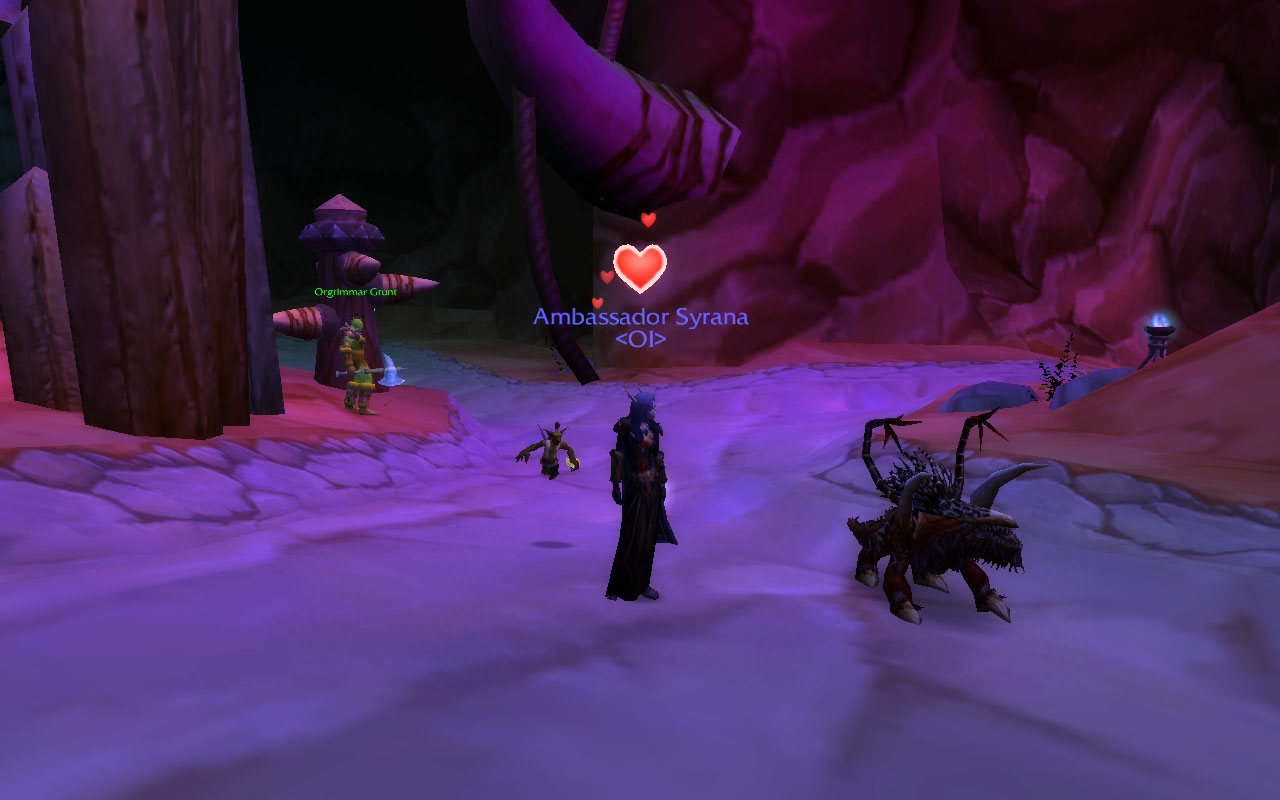 Soulbound, In Game and Out

Do you, Syrana, take Sideshow as your leveling partner,


For richer for poorer,
Through rez sickness and full hp,
For epic or greens,
Til death do you corpse run?

I, Syrana, pledge my less than 3 to you, Sideshow, in game and out.

Ok, so it didn't really happen like that.  But it would have been damn funny if it had (or sad…)  I was inspired (for lack of a better term) to provide a Syranasponse* (Yes, a new word to describe responding to a topic in Syrana fashion.  See the full definition at the end of this post.) to Rhii's (of I Sheep Things) post about playing WoW as a couple.

Rhii's post is an interesting one because it explores a very real issue: when a couple's gaming goals don't mesh.  Some people that don't have their other half in game with them may wish to have their partner play and/or talk about how lucky gaming couples are… but what if it's not all it's cracked up to be?

All Gaming Couples are Not Created Equal

For the longest time, I focused my gaming energy in different areas than Sideshow.  Actually, we still have different gaming styles that we enjoy, with some games overlapping.  WoW is one of them.

When I started, he did reroll a character with me, but we found that method wasn't working the best.  So, Sideshow continued leveling his main and I dinked around with a few alts.  Eventually I migrated to a completely different server.

At the time I played on a different server (which was for about a good year, year and a half), we still seemed to enjoy just being in the same room at the same time we each were playing.  After leveling 2 characters to level cap during The Burning Crusade era and experiencing a major case of burnout, I decided to rejoin Sideshow and transferred.

We were great dailies buddies and still are, if we're on at the same time.  We have fun running stuff together, but we don't join groups based on a 2 for 1 package deal.  We do have a couple pairs of alts that we try to only level together, but for some reason, we don't stick with those pairs for long.  Sure, we'll go back to them here and there.  I don't quite know what it is.  At first, we thought it might be something about those first 20ish levels… so I solo'd a newish character, he dusted off an alt and we met up in the 20's.  That went pretty well until we hit mid-30's range.  Then it was slow going til we hit 40 on that combo and they've been sittin'… patiently awaiting our return since before Wrath came out.

How We Make it Work

1- Compatible goals. While our in-game goals are not identical, they are compatible.  This makes it a bit easier to pursue what we want and not feel guilt about leaving the other behind in some aspect.

2- Schedule play time. We don't mark it on the calendar, but we'll talk about doing certain things in-game together prior to logging in.  Or, sometimes one of us will ask the other about “when do you want to level our duo?” or something along those lines.  For example, before Wrath came out, we made the agreement to try and level Sideshow and Syrana together from 70-80.  Let me tell ya, committing to 10 levels of partnered play is a bit easier than committing to all 80 levels.

3- Take breaks from grouping together. We both have several alts plus our mains.  We aren't always on equal leveled characters, or online at the same time, or on the same faction (gasp), or on the same realm (bigger gasp).

5- Play other games together (or separately). This goes along with #4 in some ways.  It fights burnout, but also allows you to enjoy other things together.  Or, it let's you explore your difference tastes in games if you have “your console game” and he has “his console game,” for example.

6- Have a relationship outside the game. I suppose this should be #1, but I didn't rank them in any particular order.  It's great to play together, beside each other even, and have someone to talk about WoW with all the time.  However, when it comes down to it, we have each other with or without Warcraft.

Either in the comments section here or over at Rhii's original post, please share your thoughts and/or experiences of gaming as a couple.