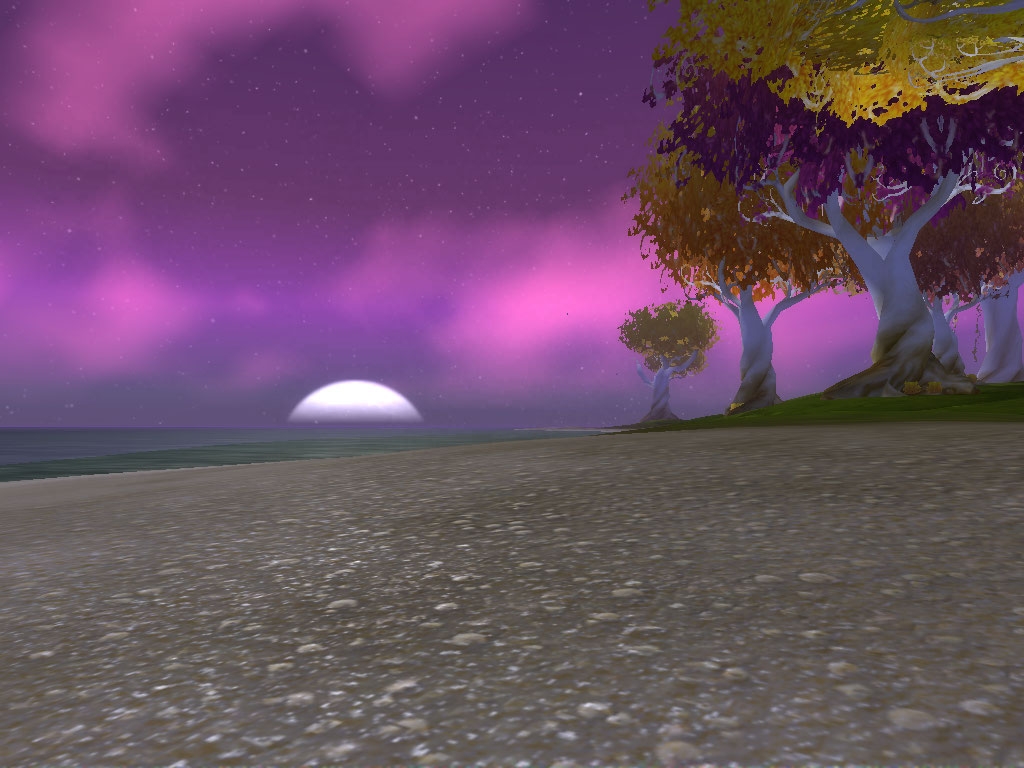 Back to the Beginning (RP)

(Part 1) For a complete list of this series, go here.

It was a cool evening, the stars were shining brightly in the night sky.  Aerissa decided to take a walk to calm her nerves.  She was feeling a bit jittery about the wedding tomorrow.  “I'm being silly,” she told herself as she clicked the door shut behind her, absently checking to make sure her daggers were in her belt.  “Enough sneaking around. After tomorrow, I need to find a new line of work,” she mumbled to herself.

The trees rustled slightly from the breeze.  Aerissa tilted her face towards the moon and smiled happily.   “I'm getting married tomorrow!” she thought.  Aerissa walked along the path, a springy bounce to her step.   As she got closer to the park, she heard what sounded like two lovers meeting in the trees beyond the path.   She smiled mischievously to herself and decided to stealth closer.

“You know I'm only doing this to please my family,” the blonde elven man said.  Aerissa could not understand the woman's response because she spoke in a language unfamiliar to Aerissa's ears.

As Aerissa got closer, she saw a Human woman in a passionate embrace with an elven male.  As the couple broke from their kiss, she realized she recognized the elven man.


“NO!” Aerissa cried out, hot tears streaming down her cheeks.

The elven man turned around quickly, his eyes full of shock, which quickly turned to rage as he dashed towards her.

Aerissa's arms flailed in the water, struggling to break through the surface for air. She wiped the water from her face and gasped for air.

“No…” she said quietly, tears streaming down her cheeks, mixing with the water from the stream.

She quickly hopped out of the water and slipped on her clothes.  She sat along the grassy bank, hugging her knees to her chest.  Aerissa rocked back and forth slightly as she tried to calm herself down.

Several hours later, Aerissa opened her eyes slowly, squinting at the sun as it streamed through the trees.   She tried to stand up, but gasped with pain and fell back against the tree.  Tears welled in her eyes as she examined her dirt streaked hands and clothes, noticing dried blood with confusion.

“Wh-where am I?” She mumbled to herself as she leaned against the tree.  Her head pounded, her memory clouded with confusion.

Aerissa sat next to the tree, dozing off, until the woods were covered by night.  She awoke with a start, her stomach rumbling and feeling as though it was about to devour itself.  Again, Aerissa attempted to stand, but she had lost too much blood and was still too weak and injured to do so.   She scanned the woods and her eyes settled on a bush full of berries.  She slowly crawled to the bush, slightly dragging her left leg.

“I hope these are safe,” Aerissa said as she plucked a handful of berries from the bush.  She studied their rich red color and decided she could die out here whether or not she chose to eat them.  Unsteady hands brought the berries to her parched lips.  As her teeth sunk into the berries, their sweet juice splashed over her tongue, filling her mouth.   She smiled slightly as she savored the berries.

Aerissa sat up quickly at the sound of twigs and branches breaking.   Her eyes flashed with fear, her heart beat quickening.  She could hear the rustle of leaves, the sounds coming closer.

Aerissa began to panic.  “How did he find me? No, I cannot die like this…” she thought, then shook her head violently.

“Who's he? And why is he trying to kill me?” she wondered.  “Damn this memory…” she mumbled.

The sounds grew louder as they grew closer and then… stopped.  Aerissa squinted into the dark, trying to make out a figure in the shadows.  The moonlight glinted off a pair of glowing eyes, which seemed to be looking right through her.  Aerissa heard what sounded like a snort and light panting, and then the eyes were gone.

Aerissa crawled behind the berry bush, curling up the best she could.  She swept leaves over herself and tried to settle down enough to get some sleep.  As her eyelids grew heavy, her right hand groped at her belt, as though it was an automatic movement to retrieve a weapon. Finding none, she frowned as she drifted off to sleep…

** Please note that some of the events included in RP pieces are based upon actual in-game role play.  Also, some of the events and/or character names may have been altered during the transition from in-game RP to story formation. **