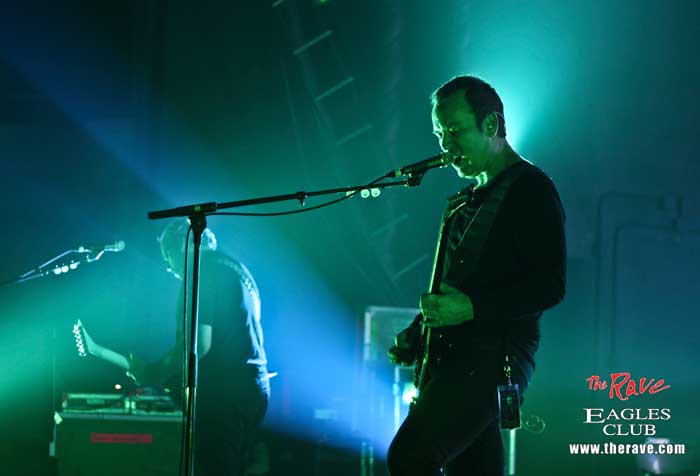 Brutal Concerts Are Brutal: Review of Mastodon and Dethklok

We'd heard awhile ago that Mastodon and Dethklok would be coming to town.  Of course, being fans of the show Metalocalypse, we thought it'd be awesome to experience Dethklok live.  The only thing was, it was slated for a Sunday night.  We hemmed and hawed, and I already has appointments scheduled for the Monday after, so I knew I wouldn't be able to take off of work.

But then, last Friday, I received an email from Sideshow while I was at work – confirming tickets to the concert on October 18th.

He opted to purchase the VIP balcony tickets at The Rave, and I'm glad he did.  That place was packed!

Along with the VIP balcony tickets, he bought the parking too, so we wouldn't have to hunt for street parking 8 blocks away.  But since we bought 'em late, we'd be picking them up willcall.  Sideshow confirmed that he'd be on a list that the parking attendant would have.  (Normally you would have the parking lot voucher when you got there.  You can also pay cash, but that's dependent on space, the vouchers guarantee you a spot.)

Since the concert was on a Sunday night, it was scheduled to start earlier, at 6:30pm.  We decide that we're more interested in Mastodon and Dethklok and can skip the opening bands since we're on the balcony.

Well, let me tell you, we had honest-to-goodness rockstar parking.  We first went to the back lot (where we parked last time) and was told that we'd have to talk to the attendant at the front lot (which has few spaces and tour buses).  So we swung around the block to get to the lot right in front of the building.  The attendant confirms we're on the list, hands Sideshow a pass to hang from the mirror and tells us to pull up and park.

We did manage to get there before the 2nd opening band, Converge, started.  Honestly, I could have handled missing that.  Now don't get me wrong, they have fans… I'm just not one of them.  I've never heard of them before and they didn't fit my musical taste.  Sure, I like heavy music with growly vocals…. but their stuff sounded chaotic.  And… well, I honestly don't know if any of their songs had lyrics.  What I heard was repetitive deep growls that were akin to a dog barking in morse code.

Jacob Bannon's vocal style is sometimes described as “ethereal”; Music reviews site Buddyhead once described it as a “dog barking through a distortion pedal.”

It was most certainly brutal on my ears.  Music I like is like sex for my ears, that… was like getting bent over after dropping the soap.  (Sorry, I just call it like I hear it.)

Mosh Pit Observations (or, You Know You Are Getting Old When…)

From the balcony, I could see the mass of people filling the downstairs general admission area.  I could also see the small mosh pits that formed.  What I didn't get were the kids flailing and whipping their arms about in the center of the pits.  Sorta hyperspeed windmills.  I don't quite get that and, well, it's not moshing if you ask me… maybe I'm just an old school mosher?  I dunno, isn't it more fun to jump/run around and slam into each other?

As far as knowing I'm getting old, damn it felt good to have a seat.  The balcony seats let me sit and view.  I didn't have to jump to see over all the tall people that find their way in front of me.  I didn't have tired, achy legs from standing for hours.  And it was easier to get outta there at the end.

Only bummer was the center balcony seats were taken (cuz we were late, y'know).  The side was fine for seeing the front part of the stage, but we couldn't see the screens during Dethklok, which kinda sucked.  Oh, that and the strobe lights were blinding at that angle.  Good thing I'm not prone to seizures.

Mastodon was up first.  I've listened to their stuff, but don't know their songs super well.  I certainly recognized several songs they performed, but was bummed they didn't play “Blood and Thunder” or “Colony of the Birchmen.”  (Being the 2 songs I know real well!)  They got progressively heavier throughout their set, and it was brutal.  A good kinda brutal.

Then came Dethklok.  We couldn't see the animation clips on the screens, but we could hear them.  It was kinda weird seeing the real guys behind one of the heaviest metal bands out there – which also happen to be animated.  And it was, by far, the loudest metal show I've been too.

We knew most of the songs and the sound was decent.  The ballroom seems to have a little wonky echo issue with killer metal drumming.  But it was worth the experience.

Sadly, there weren't any banana stickers amongst their merchandise.

1st image courtesy of Gage Grove 91 at Flickr.com
The other 2 images courtesy of The Rave