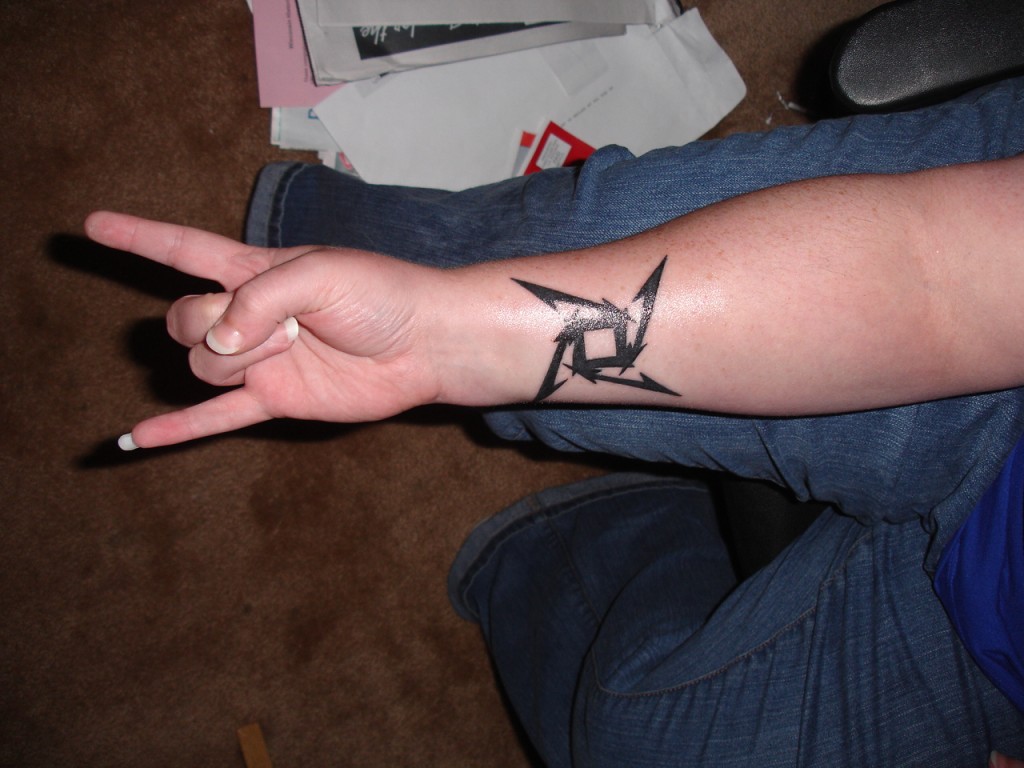 Considering I haven't logged into WoW a whole lot recently (no, I'm not quitting, just… it's summer ‘n stuff and -Oooh shiny!) and I have yet to check out the new changes since Patch 3.2 dropped yesterday… I figured I'd go for a more real life-ish post today.  Plus, I totally meant to post something after the Korn concert, which was a couple weeks ago.

For those of you that follow me on Twitter, you are already aware of my new ink.  It almost didn't happen that night though…

For years I've thought about getting a tattoo.  I love them on other people, but have always been a big wuss about the pain.  I have a low tolerance for pain and pretty much figured I would never be able to stand getting one done.  When I was 19 or so, I went as far as meeting with a tattoo artist for a design consultation, a tour of the shop (with all the fun sterilization questions and whatnot), and priced it out.

But I couldn't commit to making an appointment.

Years have gone by where I've thought about it here and there… different designs, different locations.  Then I started to become more and more determined to get one.  A friend of mine at work has a couple and she was very encouraging! 😛  She volunteered to go with me, convinced me it would barely hurt, and recommended her friend (who'd done one of her pieces).

So, then I had to decide on what.  I kept staring at the inside of my wrist and decided I wanted it there.  In my mind, I imagined the Metallica ninja star logo shrunk down and on the inside of my right wrist.

I couldn't get it out of my mind and was quite satisfied with my selection.  I finally tell my friend that I'm ready to plan this thing.  She suggests the following Friday after work.  I think about it and figure, hey, why not get it the night before the Korn concert?

I talked with Sideshow about it and tossed the idea out and about on Twitter.  (Samodean even bet $10 I'd cry… and he still owes me.)

The decision was made.

And Sideshow was a sweetheart to print off a good copy of the design for me to take in.

So that Tuesday, I tell my friend I'll definitely go on Friday night.  Tuesday night she talks to her friend and he says he doesn't have any appointments for Friday night and that he could do it.  He gave a price range of $60-$100.  (She couldn't remember what I'd said or how big.)  Wednesday she tells me we're good to go for Friday.

Thursday morning I stick the design in my purse to make sure it's there for Friday (don't ask).  She comes to my cubicle and hands over a business card for the place.  She tells me that she stopped by the shop last night, but someone scheduled her guy for a Friday night appointment.  She says not to worry though, another guy has openings and is good.

I call to schedule an appointment on Friday night with this other guy.  The girl on the phone says I will have to come in sometime today in order to give the artist the design and put down a $20 deposit before they'll schedule the appointment.  I get a bit frustrated, but we figure we can go on our lunch hour.  (Good time to note the place is like 20 minutes from where I work).

A couple hours later, we head over there.  The only person at the counter is one of the piercers.  He says he can't do anything with the appointment because neither the counterperson nor the artist are in.  He tells me I'll have to come back later… like in 40 minutes.  We explain what we've gone through already and that we can't just run across town again later.  He agrees to at least hold the design and take down my name and number.  He said I could tell the counterperson later that I already talked to him and could do the deposit over the phone.

An hour and a half later after a little bit of phone tag (me calling, neither in yet, them calling back and not leaving a message…) I finally get to talk to the artist.  He says it'll start at $100 and he'll have to redraw the design a little bit.  It can't go down as small as I originally imagined in my mind because of the detail, but would still be fine on my forearm.  He passes the phone over to the countergirl so I can set the appointment and put down my deposit via plastic.

I schedule the appointment for Friday night at 7pm.  By this time, between Mel and I, we've told about 4 different people at the shop that we're scheduling for Friday night.

Fast forward to Friday… work seems to go by crazy slow.  Everyone is getting anxious (Mel had to tell everyone in the office, of course.) and I start to get nervous.  Really nervous.  We pick up her daughter, go grab some dinner, then head over to the shop a good 30 minutes early.  Mel said I turned red as we pulled into the parking lot.  My palms were sweaty.  I was turning into a big baby.

There's a few people at the counter consulting about piercings, so we wait and look through the flash designs.  Finally, when the countergirl asks if we need help, I say I'm there for my 7pm appointment.  (It's still not even 7pm yet)

She tells me I'm not in the book and that the artist isn't there tonight.  (Mel and I also notice that her buddy isn't there either…)

I'm like “Noo, I came yesterday on my lunch and went through all that back and forth to schedule for tonight.”

Countergirl: “Yeaaahh.” *flips through appointment book* “Your appointment was for last night.”

Countergirl: “No, you called to schedule it for last night.  When I said ‘See you later!' you said ‘Ok. Bye!'”

Mel practically bares fangs as we go back and forth with her.  All the while, we see the piercer guy sitting a few feet away that we'd talked to during our lunch hour yesterday.  He says not a word.  Countergirl offers to schedule for tomorrow night.  I can't do that – I have Korn to see!  Besides, it was on.  I wanted it NOW.  And could you imagine? If I rescheduled it for Saturday, she'd probably tell me I was supposed to be there now…

I demand my deposit back, which she gave me while grumbling about how the artist used his time to redraw my design and didn't have any appointments last night because I was supposed to come in, yet it was their mess up “somehow.”  I ask for the design back too, which she tried to tell me she couldn't go through his workspace.  Mel got her to go get it so we could go somewhere else.  Worst case, I would just need to stop back at the office and print out a new one.

She tries to call her guy that was originally going to do it, then couldn't due to an appointment, who mysteriously wasn't even working… but he's not around.  She gets ahold of her sister, who's had a lot of work done.  They go back and forth about a few other parlors around town trying to figure out which would be the best one to hit up next.

Skin, her sister suggests.  So we head back across town.  We go in, and Mel says my face is no longer red.  (I was pissed!)  The place looks nice.  And clean.  We can see someone getting a piece tattooed on her stomach.

Thankfully, they had an artist with no appointments who was willing to take a walk-in.  I handed over the design and showed him where I wanted it on my arm.  He says it'll be $85.  I say sweet, let's do this.  In less than an hour, I was out of there with my tender skin.  I didn't cry.  It hurt a little, but nothing like I thought it would and it looks great.

He didn't even have to re-draw it.

TL;DR Version: First place royally effed up my appointment and didn't know what the hell day it was.  Walked in at another place that did a great job, with no re-drawing required, and a cheaper price.

(And now that I took waaaay too long to share that story, I'll wait on the Korn “review.”)