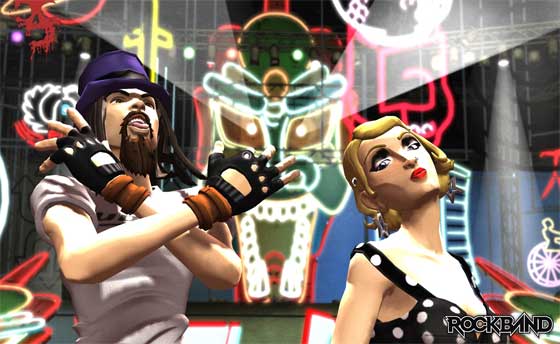 Let There Be Rock

So, we finally did it. We finally tackled Rock Band 2's Endless Setlist 2 with our virtual band, “We Have Heads.” 84 straight songs with no stopping (except some pause breaks, cuz we're gettin' old.) I was completely insane and did the whole thing on Drums on Hard. Syrana was just as crazy and did it on Vocals on Hard. So, I can't walk or raise my arms and she has no voice. We're probably the saddest couple in the world. We should join the circus. But, we had to do it since Syrana said she would.

Truthfully, though, it's a lot tougher than it sounds, if that's possible. If you played the setlist straight through without stopping for the “Bladder of Steel” achievement, you'd be playing for somewhere around 6 or 7 hours. We took about 2-3 hours total in breaks since we still had things to do on Sunday. We started around 12:30pm and finally finished around 9:30pm. No broken bones, no broken drum kits, and no Red Ring of Death. That right there is an achievement in itself.

We chose Hard difficulty because, overall, we can easily handle it. To put this much work into something, I didn't want to make it frustrating, but I did want a bit of a challenge. I can probably do 75% of the songs on Expert with no problem, but when you get towards the end of the setlist it gets very tough even on Hard. For example, Mike Schramm of WoW.com decided to play through the Endless Setlist 2 on Expert on Guitar yesterday for the Hearts, Hands, and Voices charity for Child's Play (complete coincidence). It sounds like it was pretty simple up until the end. He just couldn't make it through some of the very tough songs, which is what we didn't want to do. But, congrats to Mike for raising a bunch of money and trying his best. He made it much further than I would have.

I don't want to diminish the difficulty on playing this on another “instrument”, but I gotta say, I think the Drums are the most exhausting. Vocals will obviously strain your vocal chords and jaw and Bass/Guitar will probably wreak havoc on your fingers and wrists. Drums worked every part of my body, except my head (even though I did a little head-bobbing to help me keep rhythm) and it even made my ass numb. It looks like I need a more comfortable stool to sit on.

We were most challenged in the last 10 songs or so. Without question, this is where most of your metal songs hang out (the dark and creepy alley behind the liquor store.) The beginning songs are mostly pop, indie, and 80s songs. The last four were the “Four Horsemen of the Apocalypse” of Rock Band songs: Metallica – “Battery”, Abnormality – “Visions”, Dream Theater – “Panic Attack”, and Judas Priest – “Painkiller”. And I don't think we've ever played “Visions” before and boy were we surprised..or more so, was I surprised.

As you can tell, I was pretty worn out after those. Which is the hardest, you ask? To me, Dream Theater's Panic Attack. Battery is pretty straight forward once you figure out the repeating rhythm. Visions is just mental, but in a really fast drumming way, which I suck at, but I don't see as very challenging once you figure out the repeated parts. Painkiller is fast, but again, pretty repeatable. Dream Theater's is fast and it changes a lot. Dream Theater, and their drummer Mike Portnoy, are known for constant time signature changes and very intricate drumming. I have never been able to finish that song on Hard until this weekend and only because Syrana was able to help me with overdrive. I also wouldn't have finished Visions without her (since I failed twice) but I don't ever remember playing that song before.

Would I do it again? Definitely. Though, this list is only 84 songs of the many hundreds of songs we own, so there are a lot of other good ones out there. Have any of you tried this before? I think it's be really fun as a full band and probably easier if you were able to switch around to let people rest (like the drummer.)